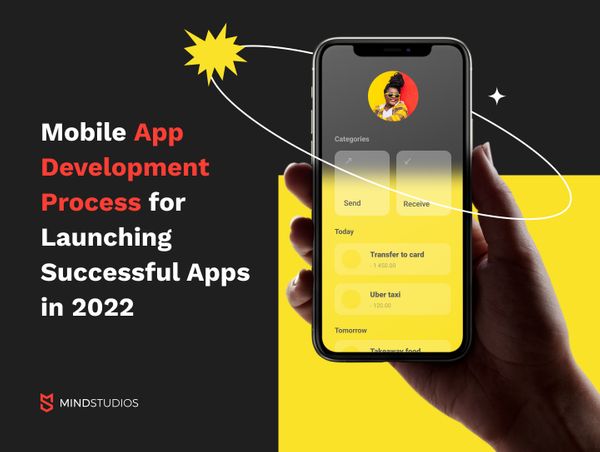 In this guide, we shine some light on how a mobile app is developed and why we do things the way we do at Mind Studios.

So you’ve come up with an app idea. That’s cool. You’re cool. Now you need to take that abstract idea and turn it into an actual application. The mobile app design and development process requires a lot of work (and time and money). But what about the details? How should you approach it? Where should you start? We have answers to these questions and many more.

The list of steps to develop a mobile app, if we were to post them in detail, would be pretty long. Long and full of jargon. So we’ve lumped them all together and divided them into four major stages for simplicity.

At the very beginning, when you assemble a team of developers or come to an outsourcing mobile app development company, your first task will be to provide as many details about the project as possible. The more detailed your project description is, the easier it will be for your app development team to feel out possible pitfalls and either avoid or neutralize them.

To make the discovery stage easier and more useful, many companies, Mind Studios included, use the Lean Canvas — a table of sorts where you fill in information about your idea, the problem your app will solve, the possible solution you’ve come up with, and more. The Lean Canvas is one of the best options to organize the most crucial information about your company in regards to the project: strengths and weaknesses, advantages you have that your competitors don’t, and so on. 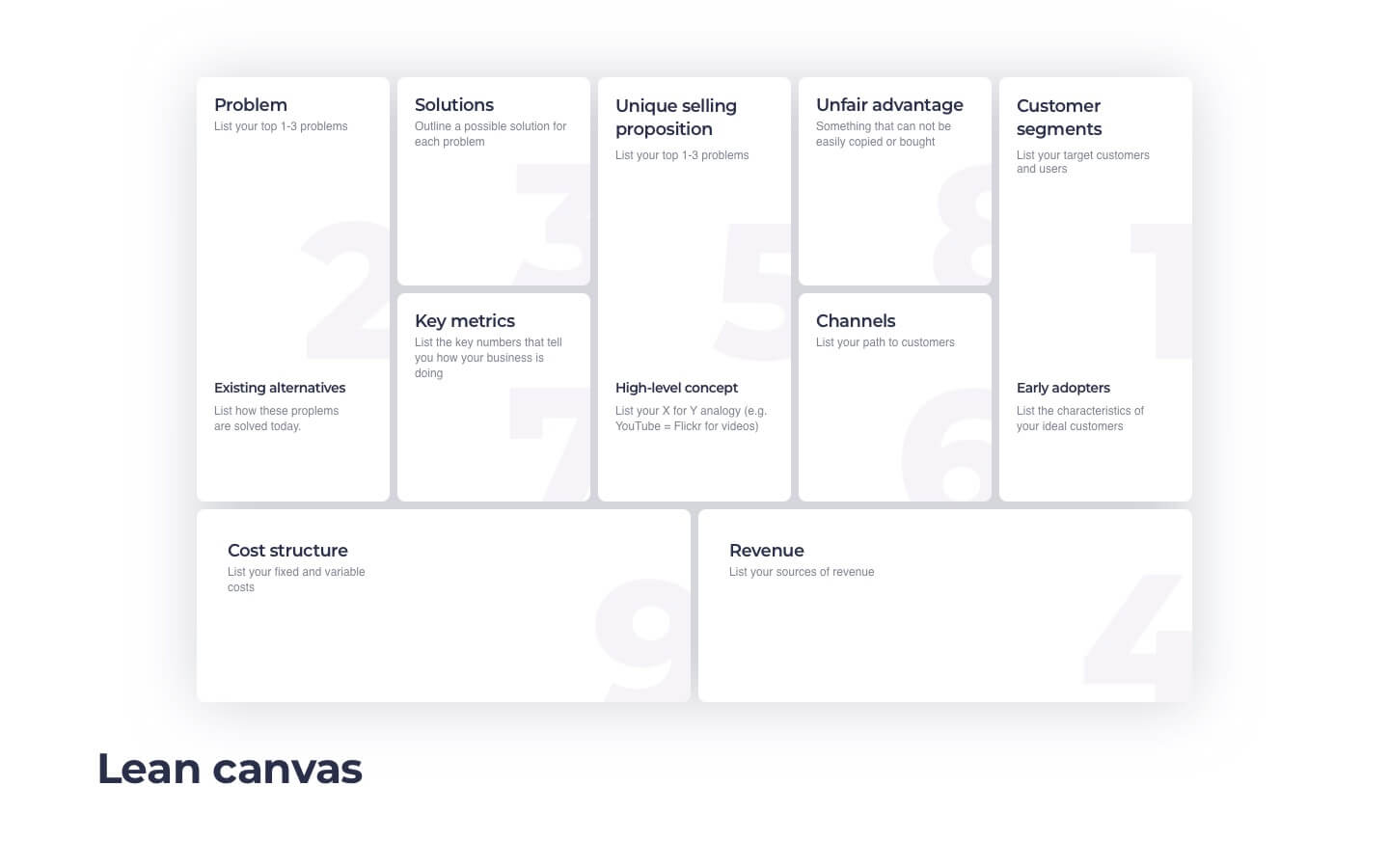 Each part of the canvas answers an important question and those answers, when combined, will help you sketch your idea and present it so that it’s possible to estimate the investment of money and time needed. This estimate will be rough, of course, but that’s a start.

Read more: How to Make a Business Model Canvas for a Mobile App Idea

You can try your hand at the Lean Canvas with CNVS or Canvanizer, if you want.

When you’re done with the Lean Canvas, you can structure the development process, visualize the connections between all major components of the app via an app development roadmap, and start sketching the process details. To better navigate the whole process, which can be pretty long and tangled, divide the components into segments.

Learn about your customer

Knowing your customer is the key to successful mobile app development. Who will purchase your product? Where are they from, what do they do, and how do they use their mobile devices? Create a generalized persona of a customer that has the problem you’re aiming to solve with your application.

You can have more than one persona, of course. In fact, it’s better if you do since the more types of customers you cater to, the more chances you’ll have of achieving success with your product. However, do keep in mind that you can’t satisfy everyone, so limit the number of typical user personas to a handful, segmented by certain parameters.

Depending on the type of your app, you might divide personas by gender, demographics, social/marital status, or employment; but the general recommendation is to make the primary parameter behavior within the app.

This is also called a low-fidelity prototype. It’s not yet a functional application; it’s just a visualization of the app that serves a single purpose — to verify that you and your team see the product the same way.

A navigation concept is a set of images that show how the connections between screens or pages will work on each of the platforms you’re building the app for. Use the segments you’ve defined earlier to create a visual concept of which screen can lead to which, how they interact, and where your users can jump between those screens.

Low-fidelity prototyping can also help with further estimation of costs, at least partially, by allowing your team to better understand the scope of functionality and be able to calculate the approximate cost to develop an app.

Having decided on the problem you wish to solve and the solution, it’s time for some deep research. Within the process of mobile app development, idea validation is your first attempt at making sure that your product doesn’t just flop. And idea validation employs a variety of methods to prove an idea’s worth.

There are a number of steps when it comes to idea validation, and depending on the type of product you’re building, you might skip some. Here are the most frequently used validation steps to create a successful mobile app:

It never hurts to go through the applications already on the app store to see the competition in your category and how your competitors deal with the problem you’re aiming to solve (if anyone is dealing with it at all).

On the one hand, surveys aren’t the most reliable source of information, and you might want to at least combine this method with something else. On the other hand, communicating with your maybe-future customers not only allows you to validate your idea but also provides the first bits of feedback, lets you know the criteria your target audience uses to decide whether they’re willing to pay and creates some presence for your brand. Win-win.

It all depends on the product you’re making and the team you’re working with, but sometimes it might be useful to conduct global search query research. It can help you see if anyone is even looking for a solution to the problem your app solves. 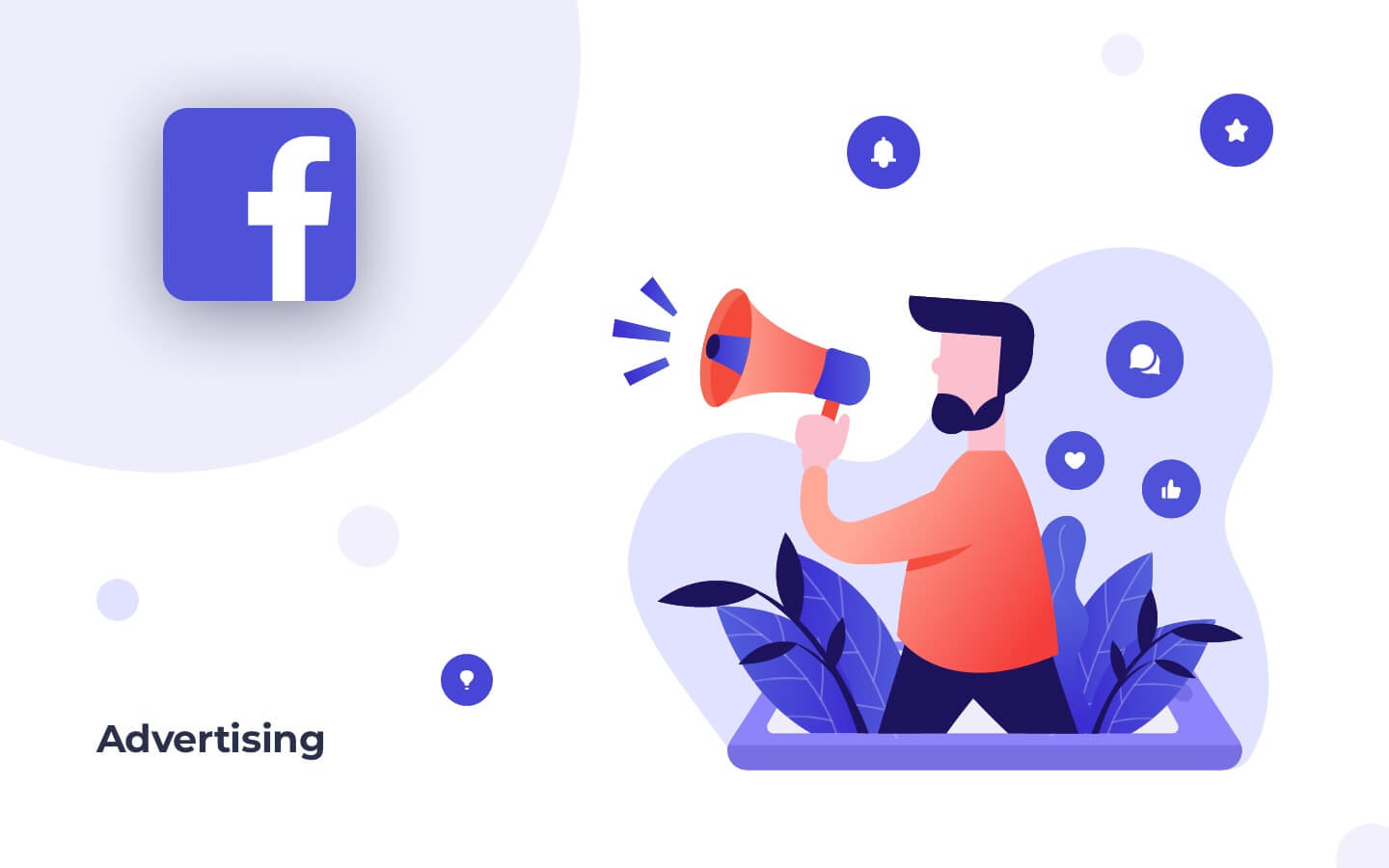 These aren’t ads as a monetization model, but ads to make your company and your product visible. Run a campaign on Facebook to see how many users are interested in what you’re looking to offer.

You’ve sketched a concept prototype at the discovery stage to make sure your team sees the project the same way you do. Now it’s time to learn if it actually achieves its goal in the eyes of your potential users. The best way to do that is to offer the prototype to a test group in some form or another: for example, as a chatbot. This is easy to do and will offer you the data necessary to proceed with fewer risks.

A minimum lovable product, or MLP, is the final step in the idea validation stage, and it’s also your first functional prototype. An MLP is similar to an MVP — a minimum viable product — but instead of creating the minimum necessary functionality, with an MLP you pay special attention to the unique feature of your product. So it’s viable but it’s also more than that. An MLP is the first result you get from all the knowledge you’ve accumulated during the first two stages, and it’s an opportunity to test all that knowledge on an actual, although heavily abridged, version of your product.

Read more about MLP vs MVP

It all seems like a lot, doesn’t it? However, it’s not as daunting as it appears at first glance. In reality, the first two stages can take from one to two months to complete, depending on product complexity. These are the shortest stages, actually. 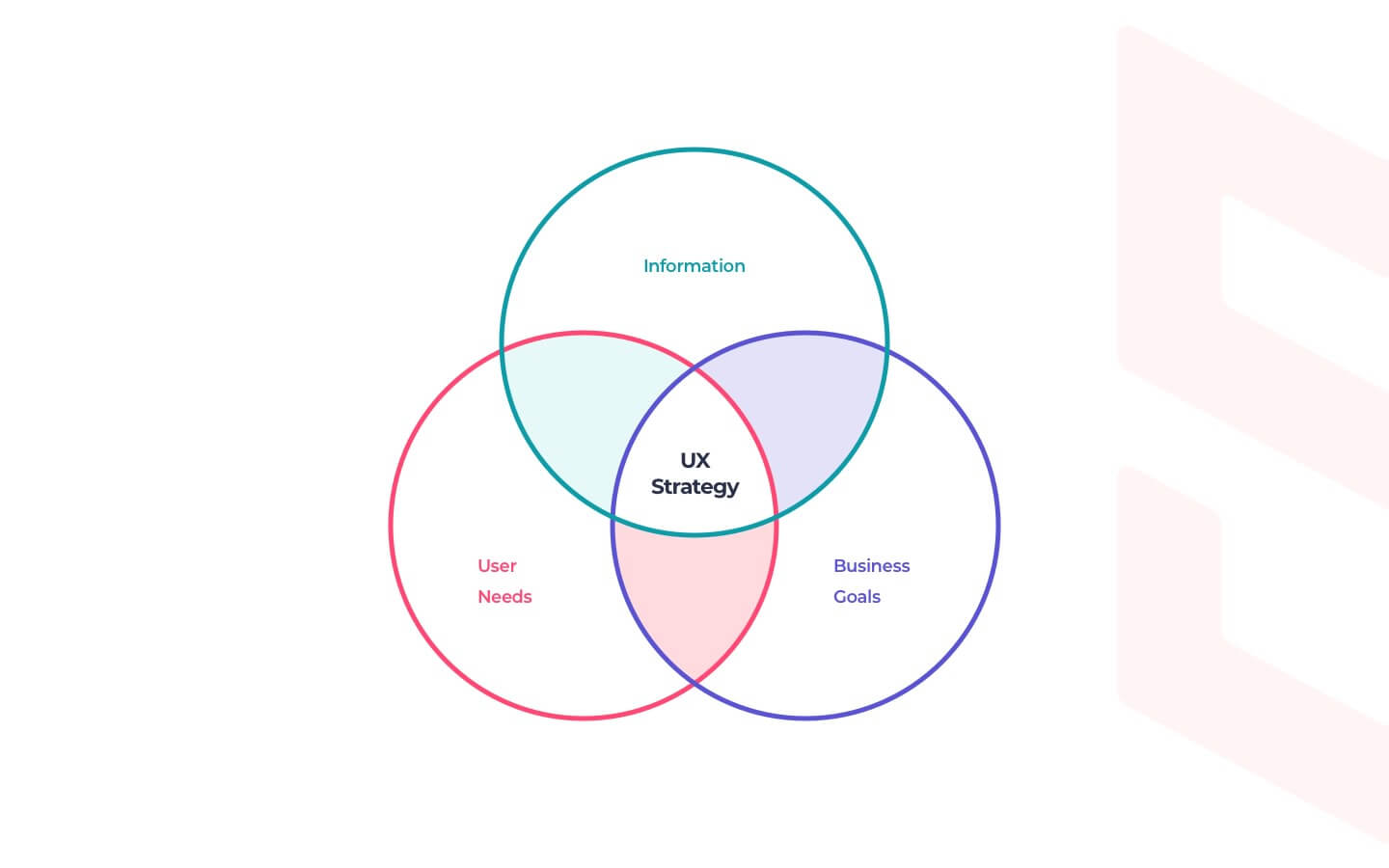 So you’re done with the first two stages and you now know that your idea is something the market needs. It’s finally time for in-depth UX design. Stage 3 of the mobile app development lifecycle is about designing the interface in all its detail.

To make everything easier, start with structuring all the data you have. There are a number of ways to do that, and you can choose the one you like best. We find ER diagrams and UML class diagrams quite useful, as they help show not only the elements themselves but also relationships and connections between them, offering a clearer picture of what it is that you’re doing.

With all your data structured neatly, it’s time to create another mockup. This time, it will be a high-fidelity prototype. 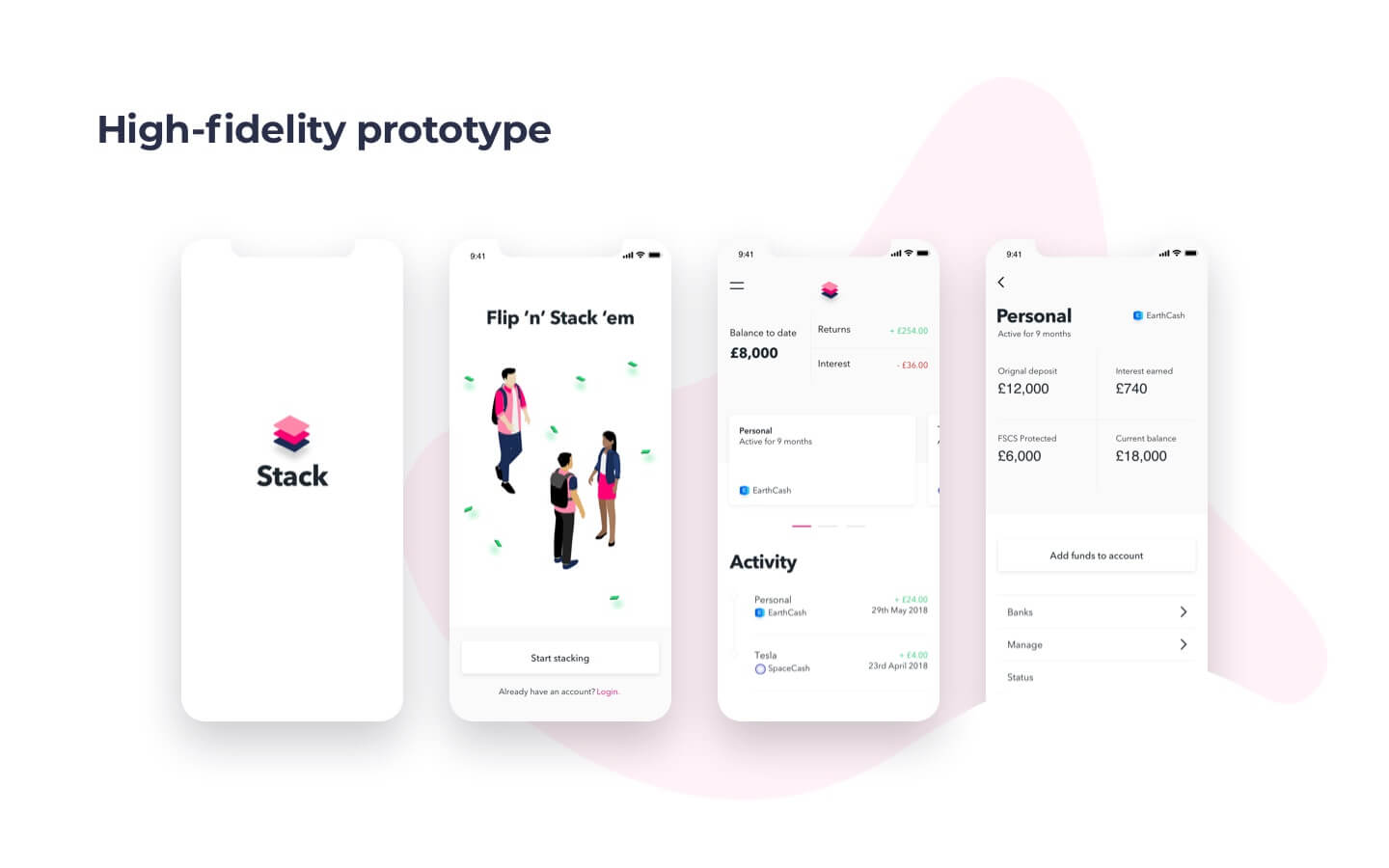 Having completed and tested a high-fidelity prototype, you’ll also be able to estimate the app development cost with a lot more precision than you did initially as well as create a more detailed and accurate project plan for the development stage. 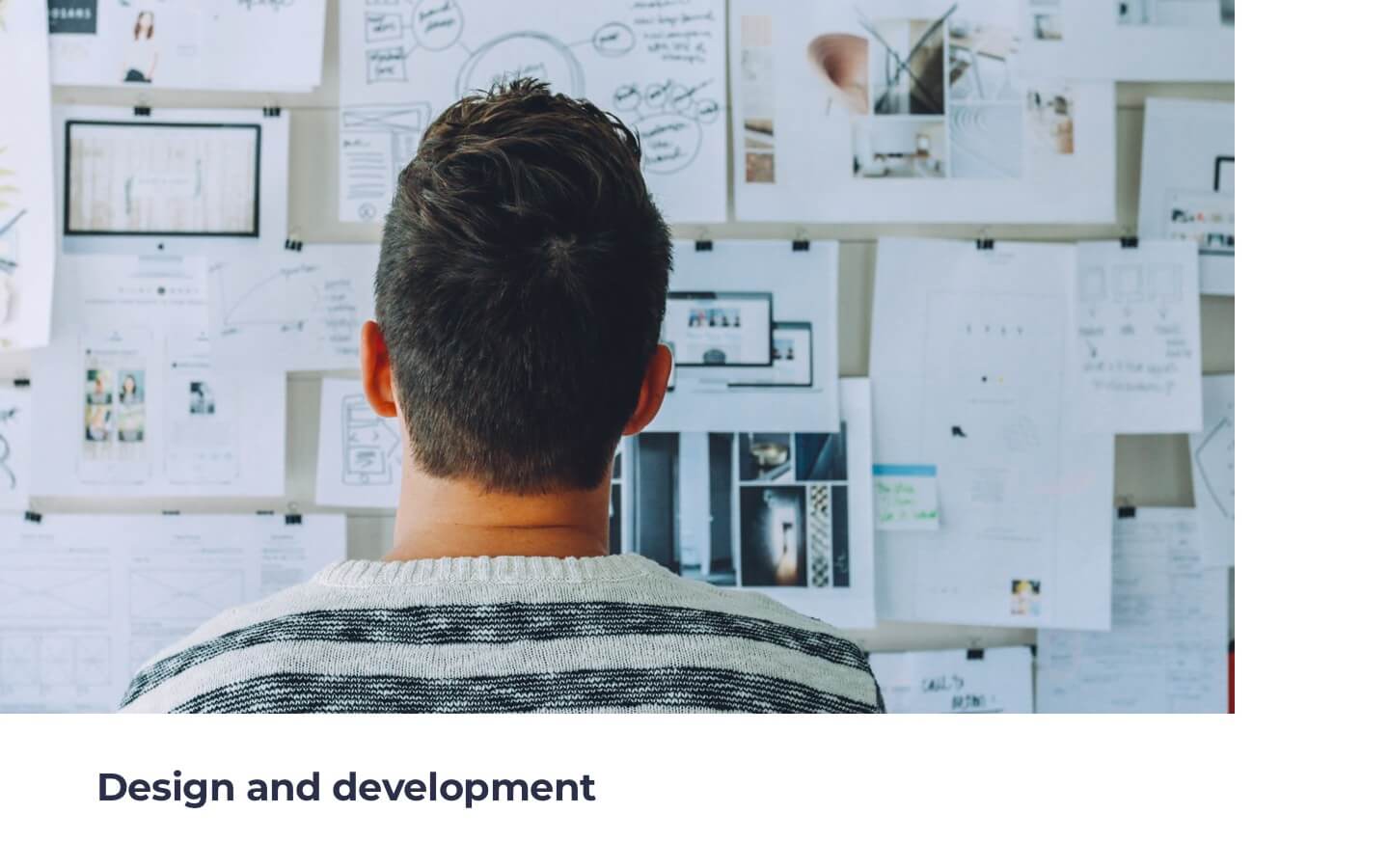 Every preparatory action has been taken, most data has been collected, all preliminary app development process steps are behind you, and it’s finally time to begin designing and coding.

At Mind Studios, we work with the Agile methodology. According to Agile, the mobile application development process flow is divided into tasks per sprint. A sprint is a short period of time, usually two weeks, during which a certain portion of the development work is completed. At the end of each sprint, the planned scope of work is compared to the work done.

Tasks are planned in the order best suited to finish your product, be it an app for mobile phones or a website, smoothly and with as few interruptions as possible. First comes the design concept sprint, aimed at creating a style guide for what the product should look like. Creating a style guide makes it possible to do the visual design simultaneously with coding or only a step or two ahead.

The sprint following design concept development is the technical setup sprint, in which you’ll be making final preparations. And then the development sprints follow, with testing at each step.

There are two sides to building a mobile app: the front end and back end.

Read more: How to build an MVP. 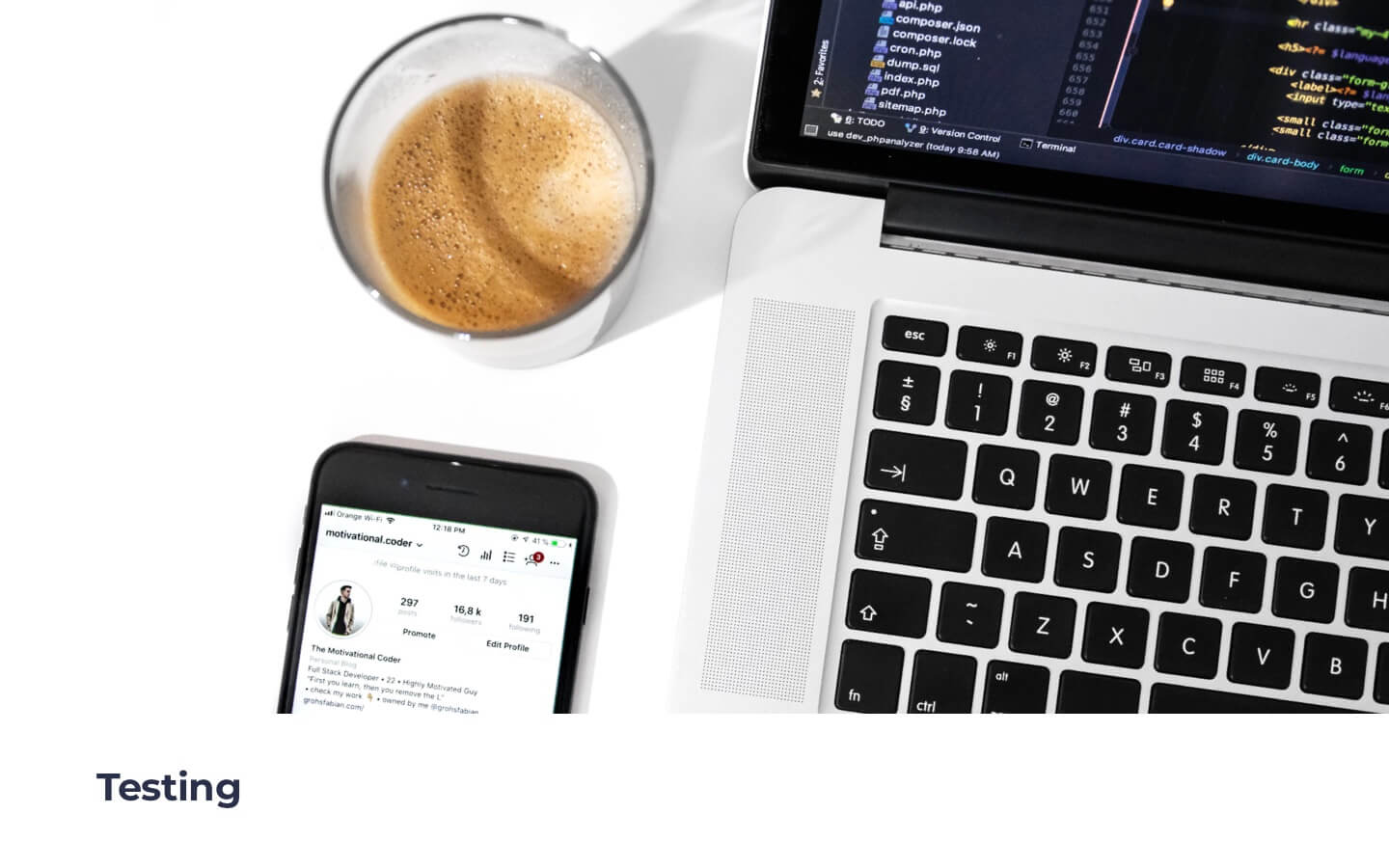 That’s it. Now you know the essential mobile app development steps as they are here at Mind Studios. Of course, the work isn’t done when the app is developed. There’s still the matter of launching, marketing, updates, and lots and lots of testing at every step. But all this comes later. With the overview above, you know in general how to make a mobile app and what to expect from your development company. If you still have any questions or need any clarification as to the steps to build a mobile app, hit us up on our contact page.

To see an example of a cost estimate, check out our latest article on how to make a coffee app like Starbucks.