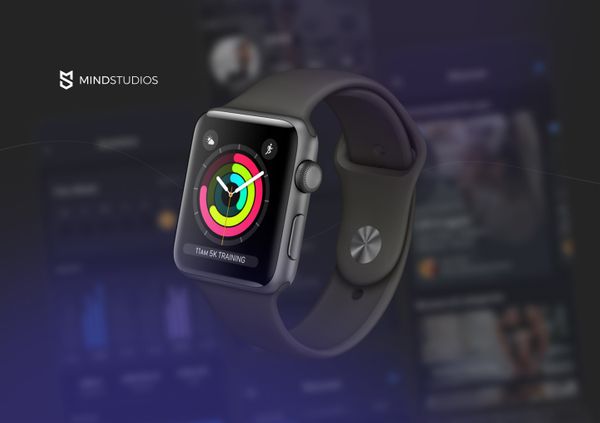 Want to attract one million users to your meditation app or make $1 million in monthly revenue from your workout app? In this article, you’ll figure out how to make a fitness app that achieves stunning results. You’ll discover trendy features and get a step-by-step guide to fitness app development. Furthermore, you’ll get an estimate of the budget needed to build a fitness app. But first things first. 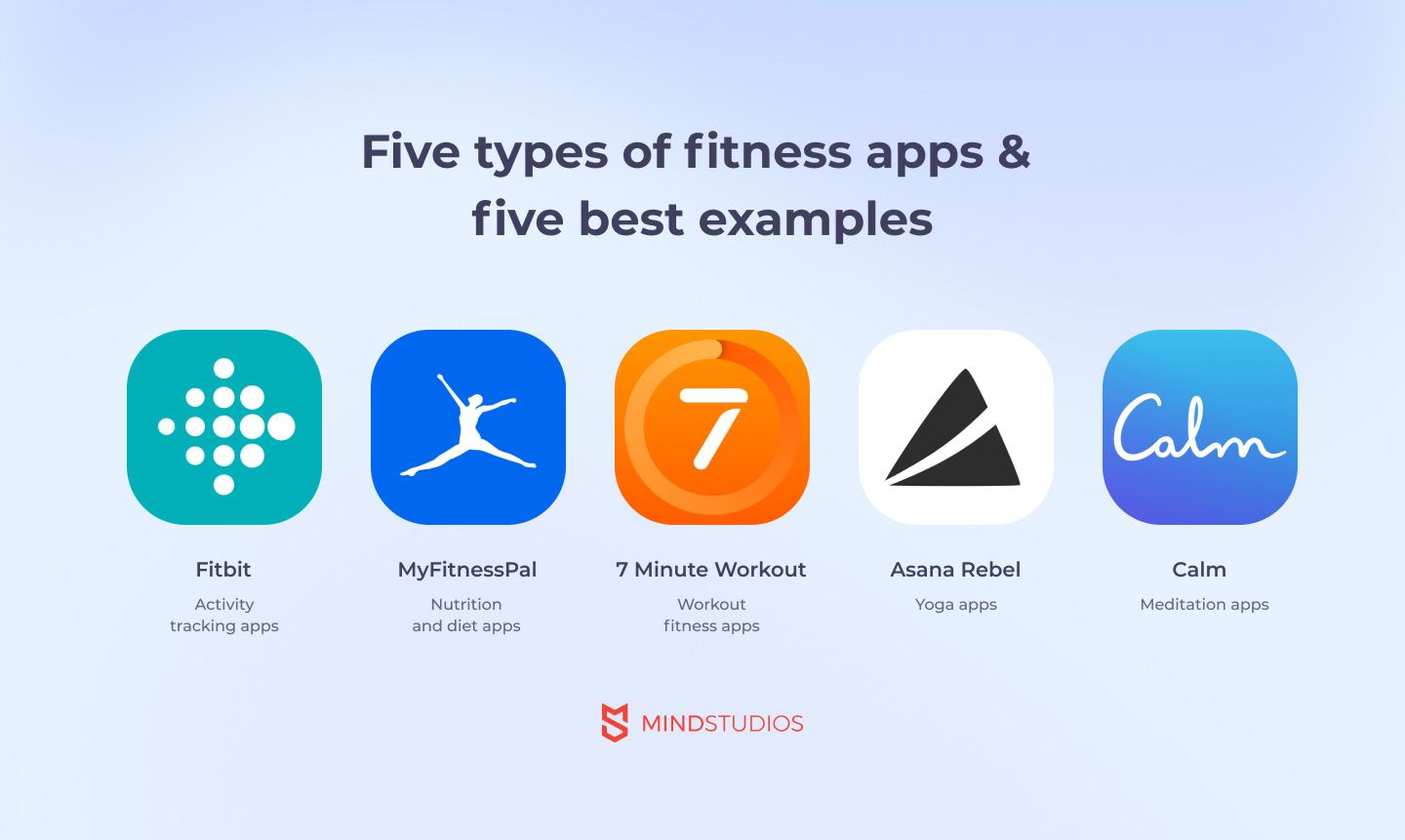 There are five main types of fitness apps:

Each type has its pioneers that still hold leading market positions:

Let’s find out how these apps became successful and what lessons you can learn from them.

Read also: How to Create a Marketplace App like Letgo or Craigslist? 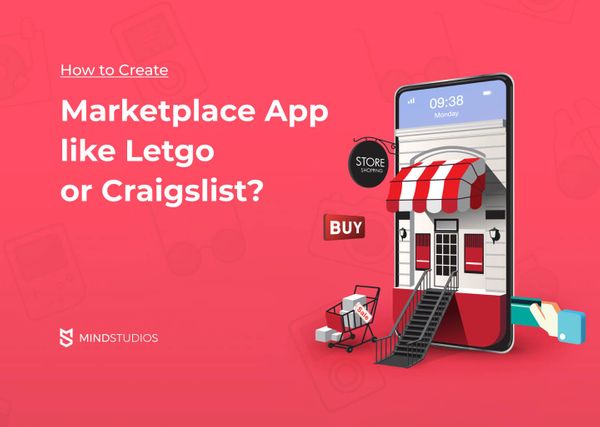 The story of the Fitbit app is related to the Fitbit fitness wristband that was developed in 2009. First there was the Fitbit website for users to upload data from wearable trackers, analyze performance, and share results with friends. Fitbit device owners could use an altimeter, a digital clock, and a stopwatch. In 2012, developers synchronized Fitbit trackers with smartphones through Bluetooth and added a smart scale.

The first Fitbit app was launched on iOS in 2011 and on Android three years later. According to Mobi Health News, in 2015, the company had 9.5 million paid active users. Since its foundation, Fitbit has prioritized hardware updates and app improvements.

The story of MyFitnessPal began in 2005 when its founder Mike Lee and his girlfriend wanted to lose weight before their beach wedding. A born developer, Mike thought “Why not make my own fitness app?” and with the help of his brother Al released the first version of MyFitnessPal on iOS in 2009.

During the next four years, he manually added products from food manufacturers and drew users into building up a comprehensive food database. Mike and Al Lee organized a separate Customer Happiness Team to meticulously respond to users’ feedback. By the year 2014 the app was also integrated with 80% of wearable fitness devices, four of the five leading GPS activity tracking apps, and the top two smart scales.

The app was so well-thought-out that in 2015 the athletic apparel brand Under Armour spent $475 million to buy MyFitnessPal.

The 7 Minute Workout app was born in May 2013 when a daily 7-minute training was the hottest new trend in the media world. 7 Minute Workout was a basic app with several screens and a primitive design launched on the iOS. Version 1.0 explained 12 exercises and had a voice prompt timer.

It took six days for the pilot app to be approved by Apple App Store. Stepwise Stuart Hall, the founder and main developer, added social sharing features and in a week — iPad support. Jun 16, 2013 was the day the app became free and the number of downloads skyrocketed. From that day through November 2014, 7 Minute Workout generated 2,300,000 downloads. Rather good for an app that took six hours to develop.

The Asana Rebel app was launched in 2015 with the idea to combine the best yoga and fitness practices. To help users form healthy habits and change their lifestyles, the Asana Rebel app motivates them by sending nutrition tips and fun quizzes once a day.

The founders decided to launch pilot apps on Android and iOS to clarify the relevance of their hypothesis to combine fitness and yoga. Two and a half years after its launch, the Asana Rebel app rose beyond 8 million downloads.

After creating three ventures, entrepreneur Michael Acton Smith was burnt out. His friend recommended meditation. Surprised that it worked, Acton organized a company called Calm in 2012.

Calm wasn’t just a simple meditation app. Its aim was to help people in all aspects of their mental fitness. This goal enabled its founders to raise $1.5 million from venture capital investors by 2017. Masterclasses by mindfulness experts and comprehensive functionality including audio meditations, sleep practices, music, body stretching, nature screens, and sounds led the Calm app to be the number one meditation app. In H1 2020, Calm was installed 8.6 million times in the US.

Read more: How to raise money for your mobile app startup.

Building a fitness app: start with a plan 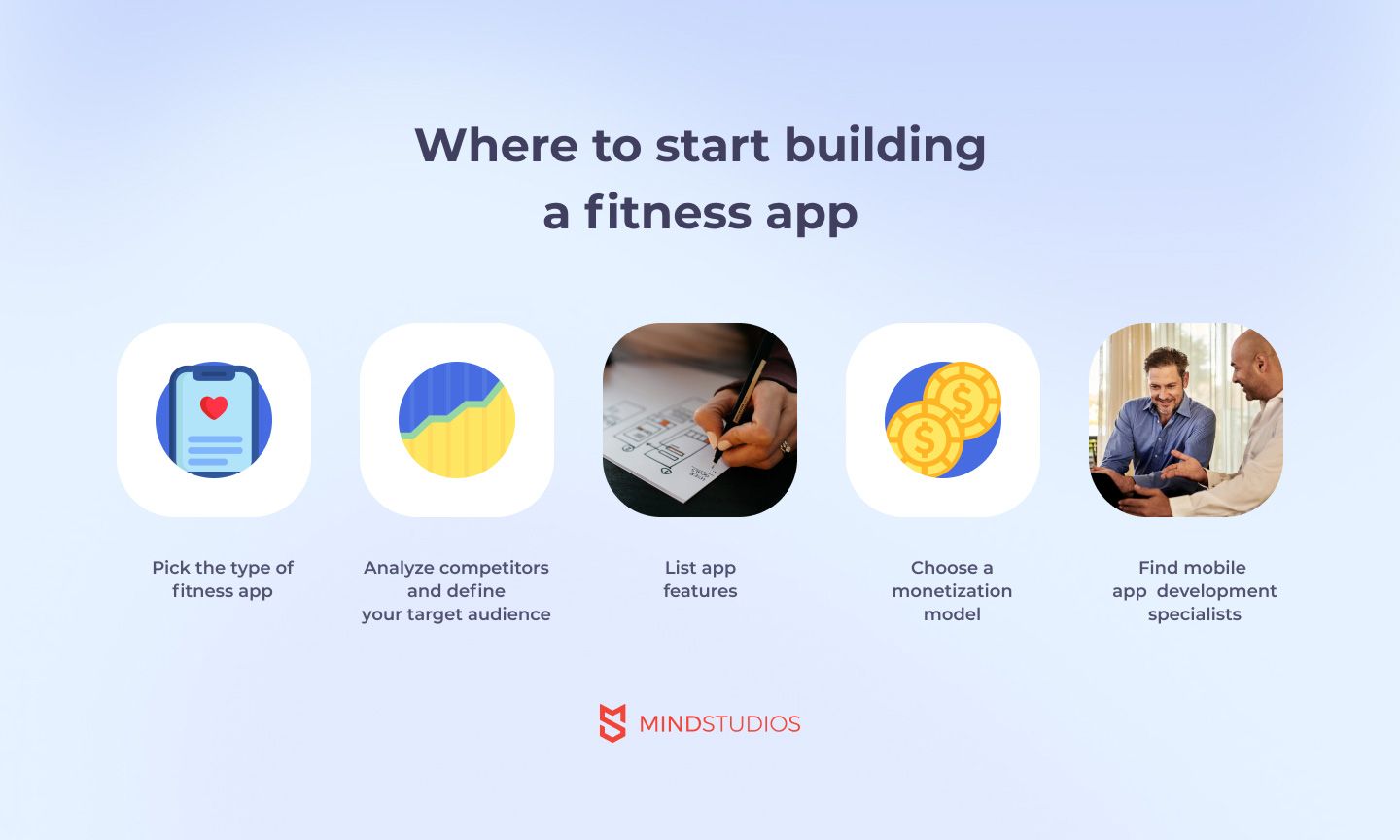 The path to success in every business starts with a plan. When creating a fitness app, you need to start by defining the type of app. When you choose the type of app to develop, you set the direction for your entire project. The type of app also predetermines your market, competitors, target audience, and app features. When compiling a business plan for a mobile app, you should also think of a unique value proposition and ways of getting money.

Pick the type of your fitness app

The five main types of health and fitness apps can be divided into subtypes that, despite having certain commonalities like tracking progress or compiling meal plans, target different users, track different app metrics, and provide different functionality. To make your choice quick and easy, we’ve classified these subtypes of fitness apps and mentioned the top three apps of each type with at least 4.4 stars on the Google Play Store and Apple App Store.

Nutrition and diet apps are useful for users who want to lose or gain weight and improve their eating habits. These apps help track protein, fat, and carbs eaten along with calories burned, control water and coffee intake, and give data about ingredients.

Read more about how to make a diet and nutrition app.

Workout and exercise fitness apps are useful for people who don’t have time to go to the gym or attend group training sessions. They provide exercises and workout plans, track weight, calories burned, and progress.

Yoga apps specialize in physical and mental health, provide yoga and fitness practices, and are aimed at changing users’ lifestyles.

Before proceeding, you might think of carving out your own unique niche. You might consider creating a Zumba dance fitness app for family sessions, a pilates app for older people, or a meditation app for pregnant women. 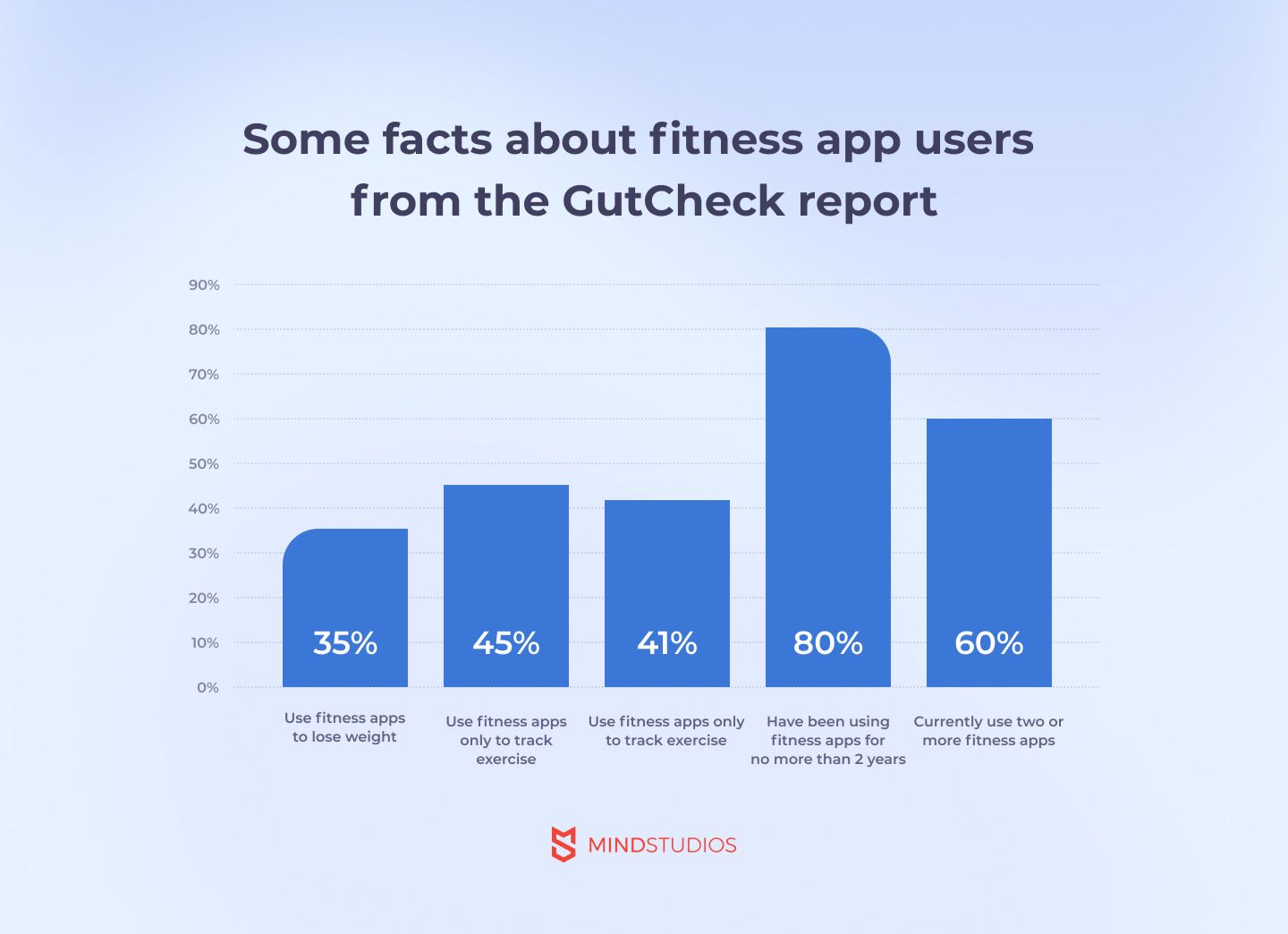 After choosing the type of fitness app you want to build, you need to research the market and explore competitors’ offers. Look at similar fitness apps, read comments and reviews, and check with users about their experiences.

You should perform SWOT analysis to identify the strengths, weaknesses, opportunities, and threats of your direct competitors. 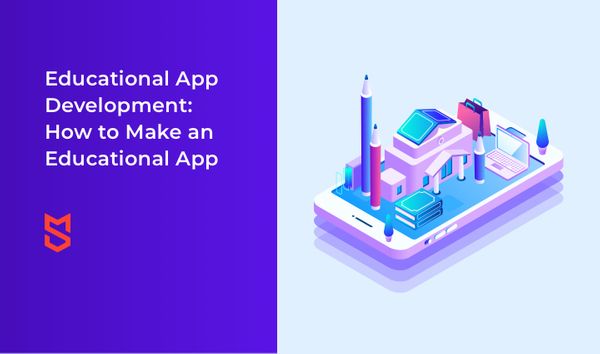 What about defining target users for a fitness app? Users from the US have the highest adoption rate of fitness apps worldwide. Based on Gallup’s annual Health and Healthcare survey, the percentage of Americans who use fitness apps is as follows: 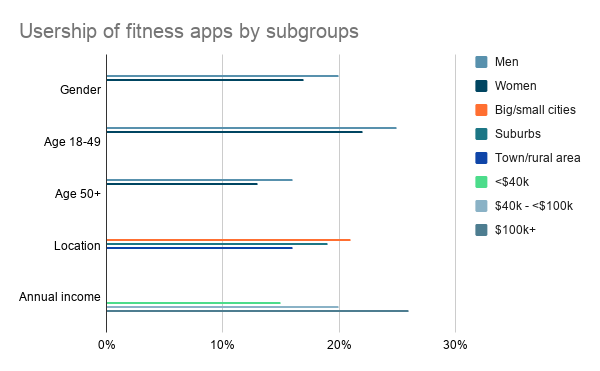 The average fitness app user in the US is a man between 18 and 49 years old who lives in a city and has a relatively high income. You can draw up a profile of your potential consumer by analogy.

Wondering what features you should include in your exercise app? We’ve compiled a list of must-have features that fitness apps provide.

Features you can put in a backlog and add after implementing a successful pilot app include: 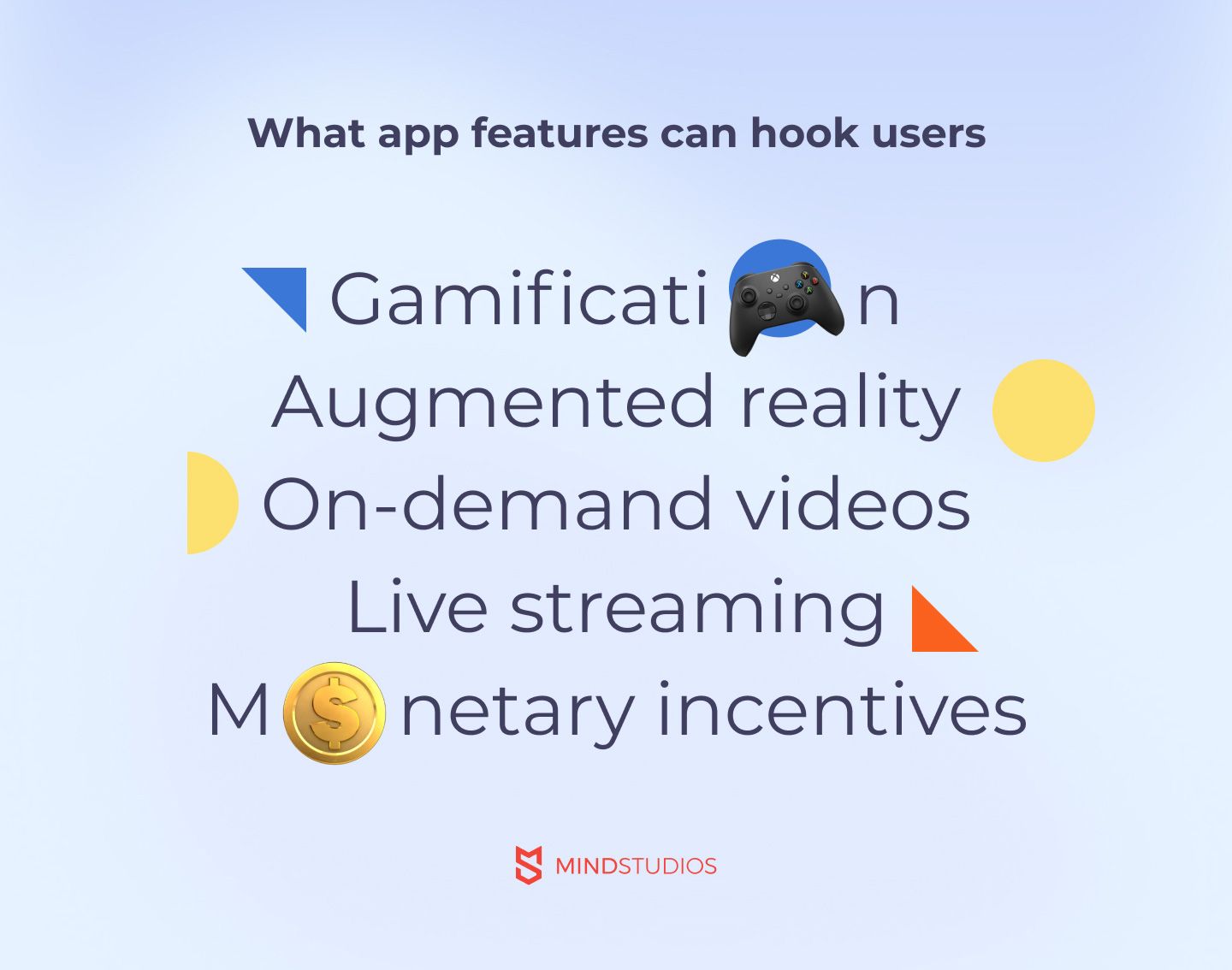 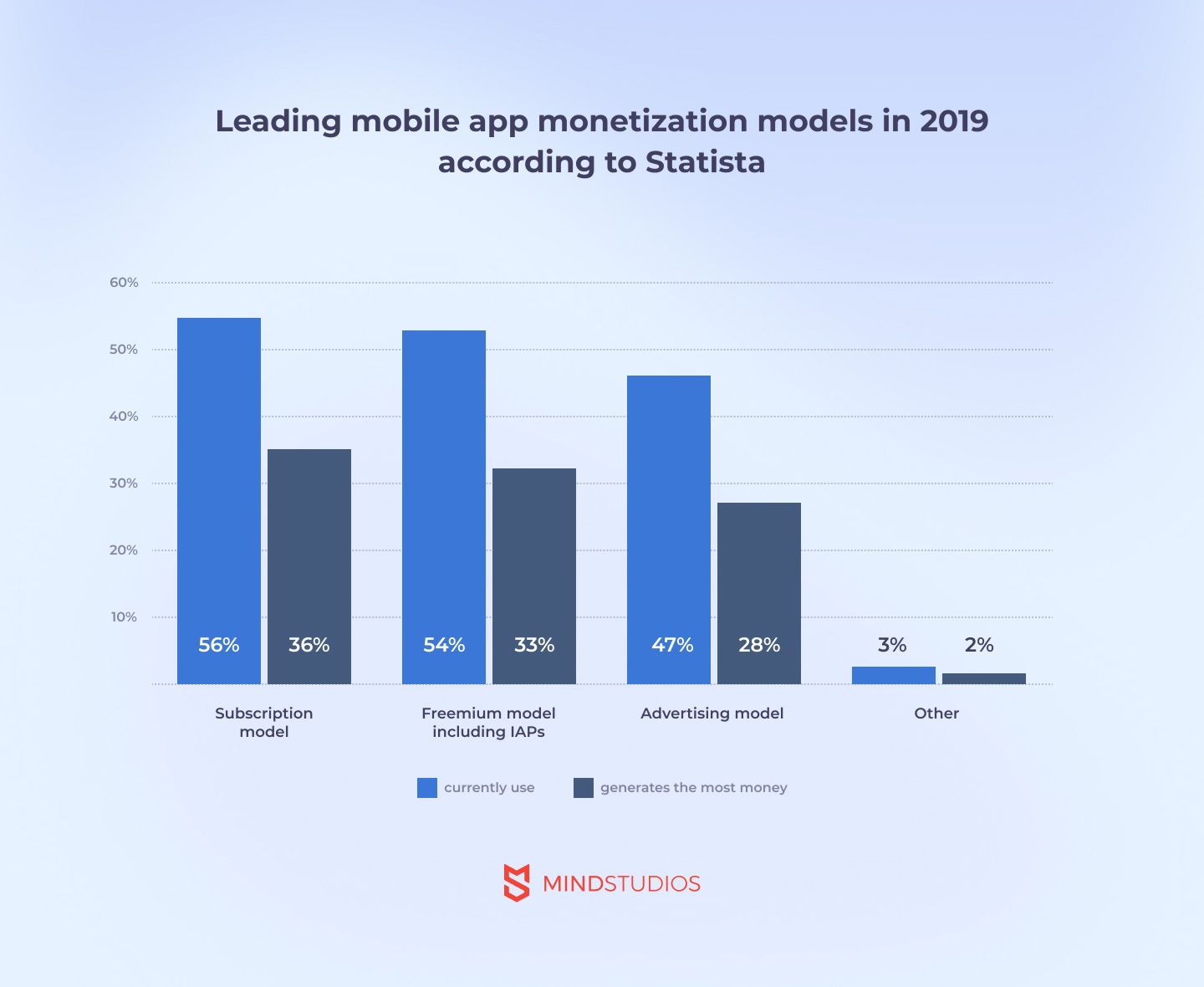 How will your fitness app bring you money? There are four main monetization models:

Paid apps are ineffective for new brands and startups. People won’t pay if they don’t perceive value. Ads constantly interrupt video viewing and online sessions, so they’re not welcome for meditation, yoga, and workout apps. In turn, a free download with in-app purchases like paid access to premium features or content requires a well-thought-out pricing policy. The benefit of a paid subscription model is that it gives users access to a wide variety of content right away while promising a steady flow of payments for app owners.

According to Statista, the most useful and profitable monetization model is the paid subscription model. But you’re free to choose based on your business goals and app. At any rate, you should pick a business model for your app at the discovery stage of development. Below, we’ll bring you up to speed on the app development stages.

Which is the right team of app developers for your product? The right team is one that meets your requirements regarding quality, time, and money.

When choosing a team of developers, you should take into consideration:

You can hire full-time specialists to work on a project from your office. An in-house team is effective for large-scale projects where total revenue can offset the cost of maintaining employees.

Alternatively, you can collaborate with freelancers, picking them based on clients’ reviews, ratings, and project portfolios. But searching for skilled freelancers could take lots of time. Moreover, it increases the risk of getting pseudo specialists and breaking your deadlines.

The third option is to entrust your project to an outsourcing mobile app development company. An outsourcing company can start to develop your app idea from scratch right away, since they have a tight-knit team of skilled specialists and proven approaches to software development.

Stages of developing a fitness app 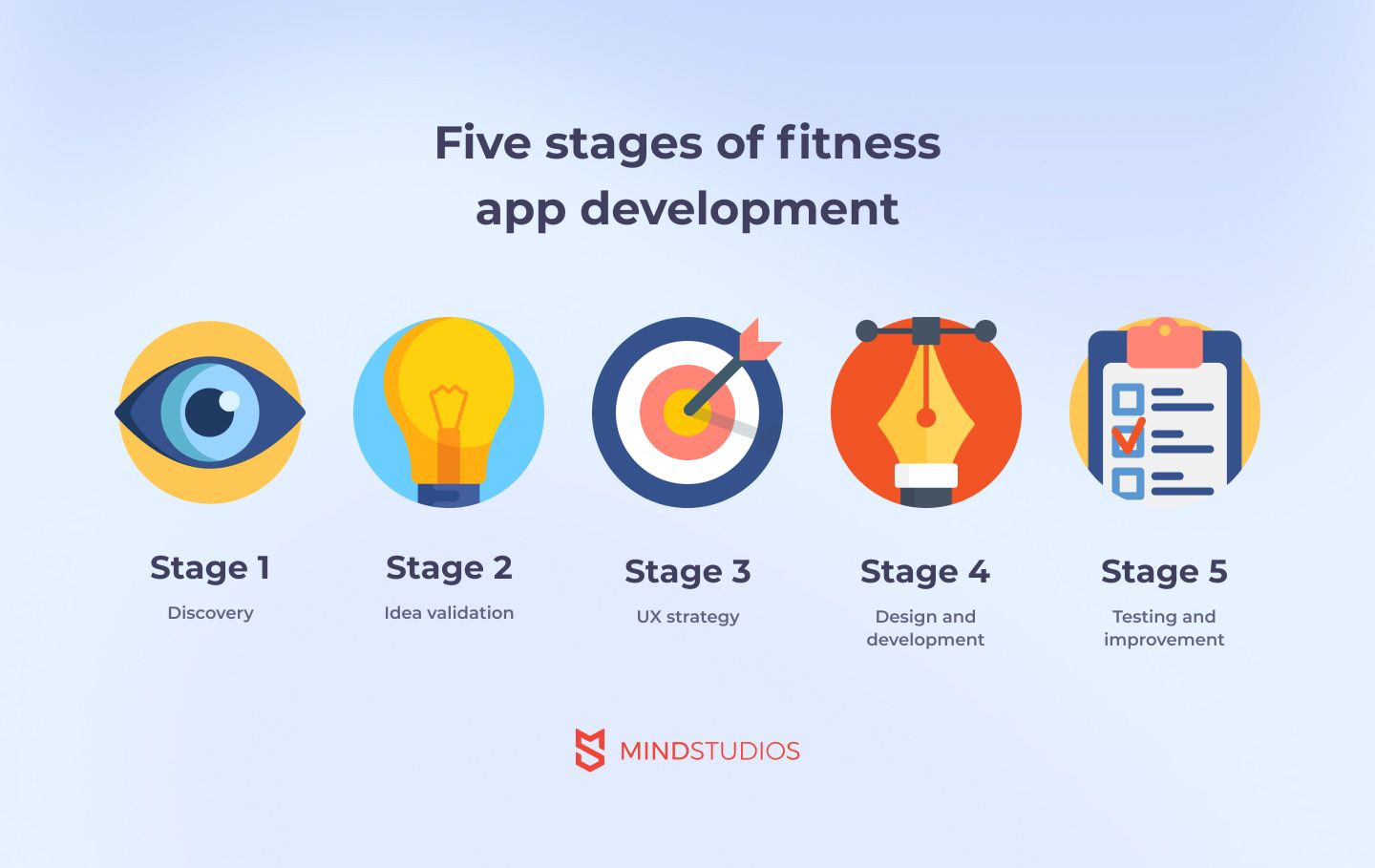 Your fitness app will pass through five stages of development:

Stage 1 — Discovery. At this stage, your mobile app development team conducts initial market research and figures out if your fitness app idea is marketable or what can make it marketable. With a product manager, designer, and project manager, you’ll brainstorm and:

At the end of the discovery stage, you’ll get a low-fidelity app prototype needed to ensure all stakeholders have a common vision.

Stage 2 — Idea validation. At the discovery stage, you analyze problems your app will be able to solve. At the idea validation stage, you need to check the solutions your app’s going to provide. To do this, you need to involve the whole development team: a product/project manager, UI/UX designer, iOS and/or Android developer, backend developer, and quality assurance engineer. They will:

The final result of the idea validation stage is a medium-fidelity app prototype with mid-level visualization. It can be used to get initial feedback from potential consumers and/or beta testers.

Stage 3 — UX strategy. At this stage, your team of developers works on a detailed app interface and interactions between screens. For the UX strategy stage, you need to enlist the whole app development team to:

A high-fidelity prototype is the closest resemblance to the final design in terms of details and functionality.

After the design and development stage, you’ll get a minimum viable product (MVP) that possesses your product’s main features, an improved design compared to high-fidelity app prototype, and an intuitive interface based on preliminary prototypes and feedback from QA engineers.

Stage 5 — Testing and improvement. This stage involves many iterations of the following cycle:

This stage also requires the involvement of the whole app development team. The testing and improvement stage pauses when you get a fully fledged fitness app but continues right after you decide to change something.

Cost to develop a fitness app

To make a fitness app, your minimal app development team should consist of:

The number of hours to develop a fitness app that includes several easy-to-build features and one platform will start from the following values:

The fitness app market has been expanding for the last decade, but in 2020, pandemic-caused lockdowns and social isolation caused a new round of virtual fitness app development. More and more people are realizing the benefits of exercising anywhere, anytime, using smartphones and wearables. This means the fitness app market will only grow. From 2021 to 2028, Grand View Research company expects it to grow at a compound annual growth rate (CAGR) of 21.6%.

Despite the dominance of big-name apps like Nike Training Club, Fitbit, and MyFitnessPal, users are still looking for alternatives. Who says your fitness app can’t be one of them?