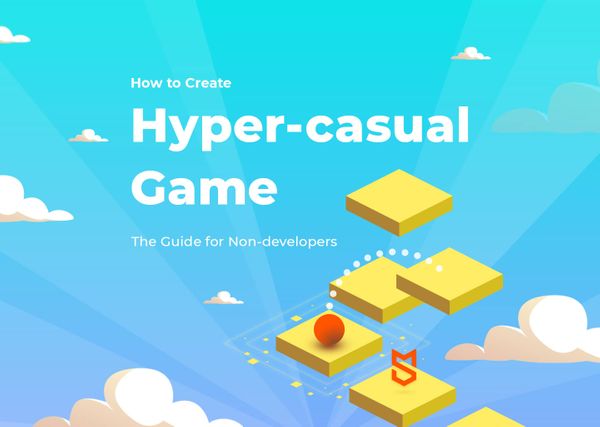 In this article, we offer advice on how to make a hyper casual game and monetize it successfully.

Hyper casual games are in trend. According to SensorTower, from 2017 to 2018, hyper casual game development company Voodoo moved from twenty-fifth to third on the list of the world’s leading companies by app downloads. With nearly a billion downloads, Voodoo only lost to Facebook and Google. Its Helix Jump game has been domineering both the Apple App Store and Google Play Store.

Trends come and go, though, and one should strike while the iron’s hot. Now is the time to make your own hyper casual game. Want to know how to create hyper casual games as popular as Voodoo’s? Here’s a short-ish breakdown of the topic.

Read more: How to Make a Tycoon Game Like AdVenture Capitalist 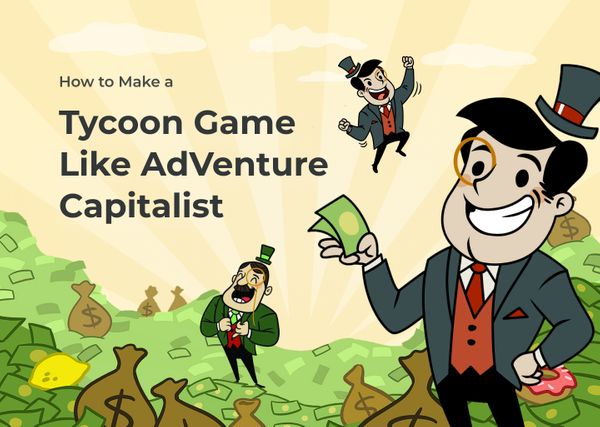 What are hyper casual games? 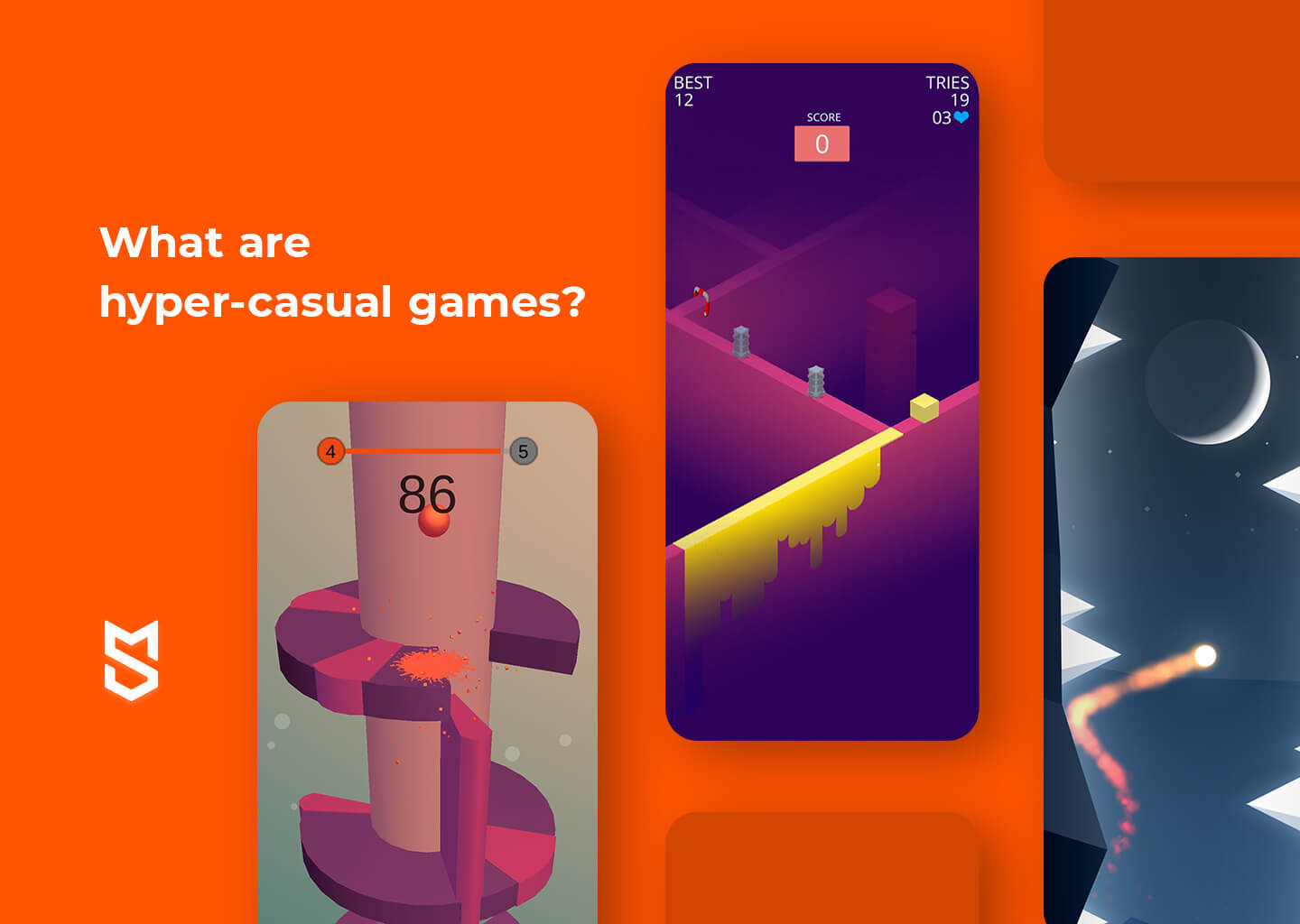 There used to be three major categories of mobile games, according to Johannes Heinze, the inventor of the term “hyper-casual”: casual, mid-core, and hardcore. These terms partially correspond to categories of gamers, the most dedicated of which — hardcore gamers — spend huge amounts of money on games.

One way to distinguish between these three categories of mobile games is by their target audience. Casual games target the mass market. They’re simple, straightforward, and usually have some kind of freemium monetization model. Hardcore games, on the other hand, rely on a smaller but more committed audience that makes more in-app purchases and pays to download. Mid-core games are, as the name suggests, somewhere in between.

But if casual games are the simplest, then what are hyper-casual games?

If you are intrested in hyper casual game development, you can always contact our team for a free consultation.

Hyper casual games are known for their clean and simple visuals. You won’t find extremely detailed characters or backgrounds here. Most hyper-casual games use basic geometry and lines. Design solutions like this make focusing easier — and the player’s focus is of the utmost importance in hyper casual games.

In addition to simplified visuals, hyper casual games have very limited mechanics. Most hyper casuals are focused on a single mechanic. Though some have two, it’s rare to see more than that. At the same time, the range of game mechanics to choose from is quite large, which differentiates hyper casual games from idle clickers.

Therefore, when thinking about the hyper casual game design in particular, it is usually recommended that the design should be simple and uncomplicated, but at the same time responsive and understandable. If you’re interested, we also have an article about how to make an idle clicker game.

How to monetize hyper casual games 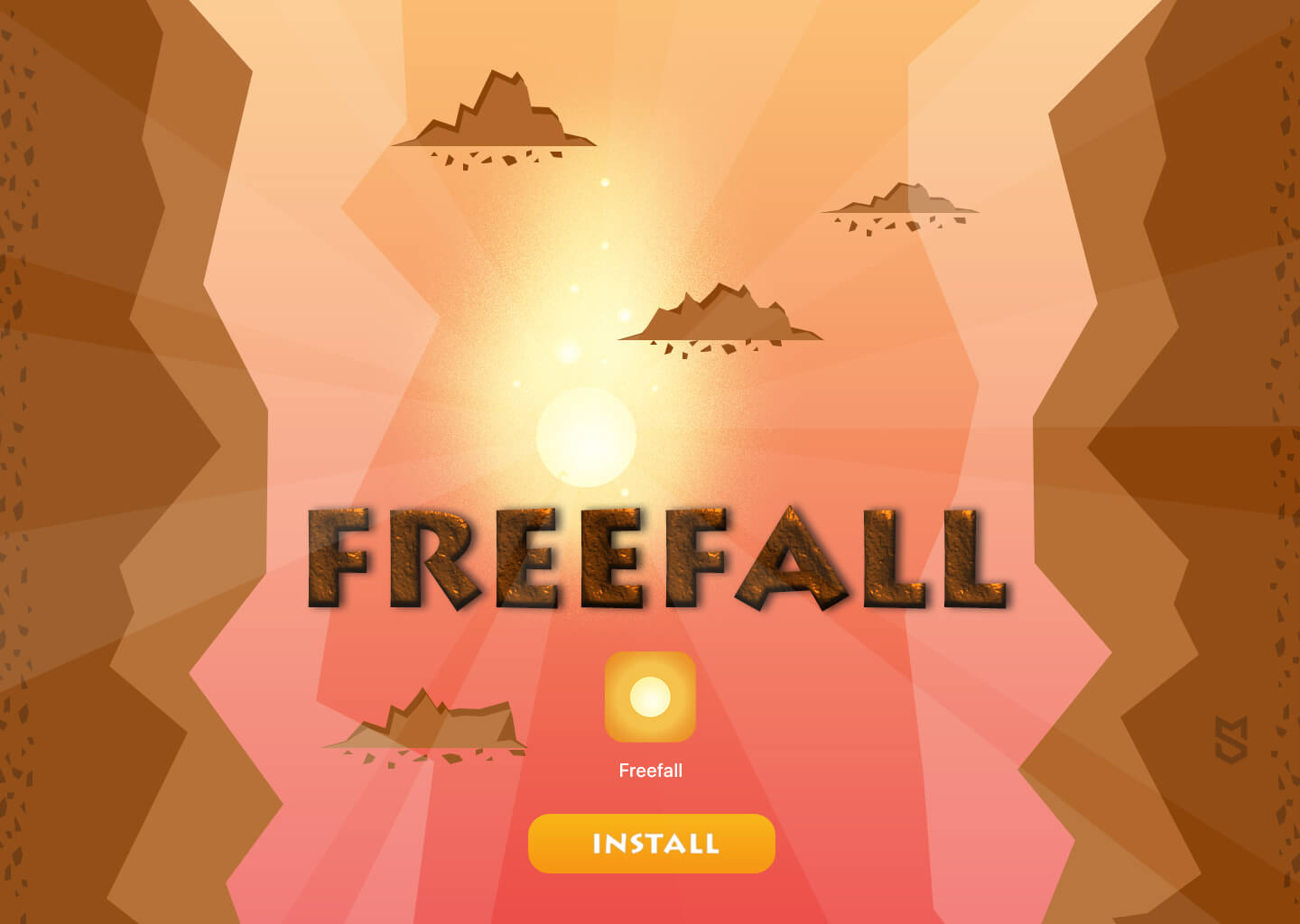 If you check out hyper casual games in any app store, you’ll see that they’re generally free to play and many of them don’t even sport the “In-app purchases” label. So how do they make money?

In-app purchases are usually offered in games that attract hardcore players. Hardcore games have a high conversion rate, meaning a large number of players who either regularly or occasionally make in-app purchases (IAPs). Revenue from these purchases covers the development and support costs, even allowing for non-paying players.

Monetizing hyper-casuals with IAPs rarely works well since casual gamers don’t convert to paying customers all that much. The primary business model for hyper casual game developers is ads: banners, video ads, and the option to turn off these ads.

If developed and marketed well, hyper-casual games attract massive numbers of casual players. Decent game design will produce high retention — even if playing sessions are short, users continue to come back to play every spare minute they have. Hyper casual games set retention as a priority instead of conversion. Besides, ads provide more immediate revenue than IAPs.

How to make a hyper casual mobile game 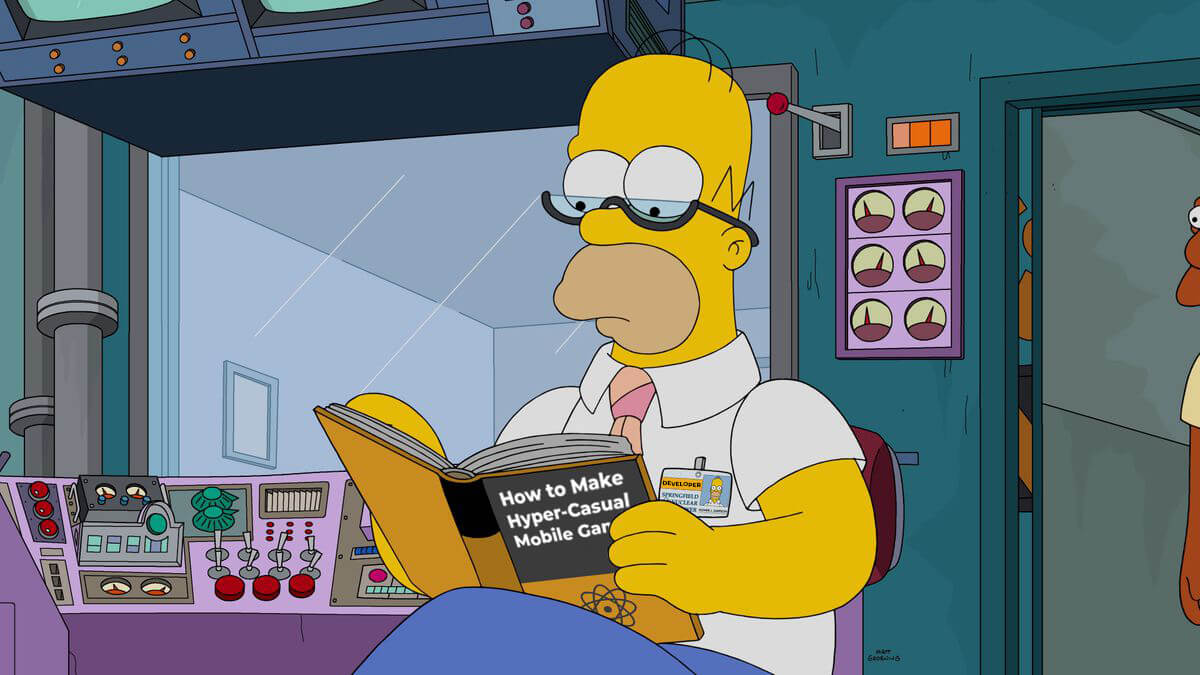 What else do you need to pay attention to while making hyper casual games?

As we’ve already mentioned — several times, because it’s important and we can’t stress it enough — one of the hallmarks of hyper casual games is the simplicity of both the game design and visuals. However, simple doesn’t mean you can just throw in anything that comes to mind. In game design, simplicity is the heart of sophistication. Meaning that the art of your game must be beautiful even if it’s simple. Otherwise, no one will look twice at it. That’s just how the gaming industry works.

At the beginning of the game design stage, you’ll need to discuss with the team what kind of visuals you need. Then graphic designers will offer mock-ups for you to choose from. Only when the visuals are agreed upon can the development stage start.

Most mobile games today are built with the Unity engine. That includes hyper-casuals. The biggest selling point of Unreal Engine — the other popular game engine — is its superb 3D development features, but Unity isn’t too far behind in this department. For a hyper casual game, it’s more than enough.

At the same time, Unity requires far less processing power than Unreal Engine and still offers more than decent 2D and 3D graphics and plenty of development features. Writing code in either Unreal Engine or Unity will allow you to create games for Android as well as for iOS devices, but Unity-made games will be lighter and, hence, will work more smoothly even on smartphones without high-end processors.

Then there’s the backend. The backend, or server part, isn’t always necessary for hyper-casual games, just as it isn’t always necessary for idle games. These types are lightweight enough to store everything either on the user’s device or in the cloud. But that depends on the features you decide to include in your game, of course. Push notifications, in-app purchases, and sharing progress on social networks aren’t necessary features. But if you do want to add some bells and whistles, a backend may be required. 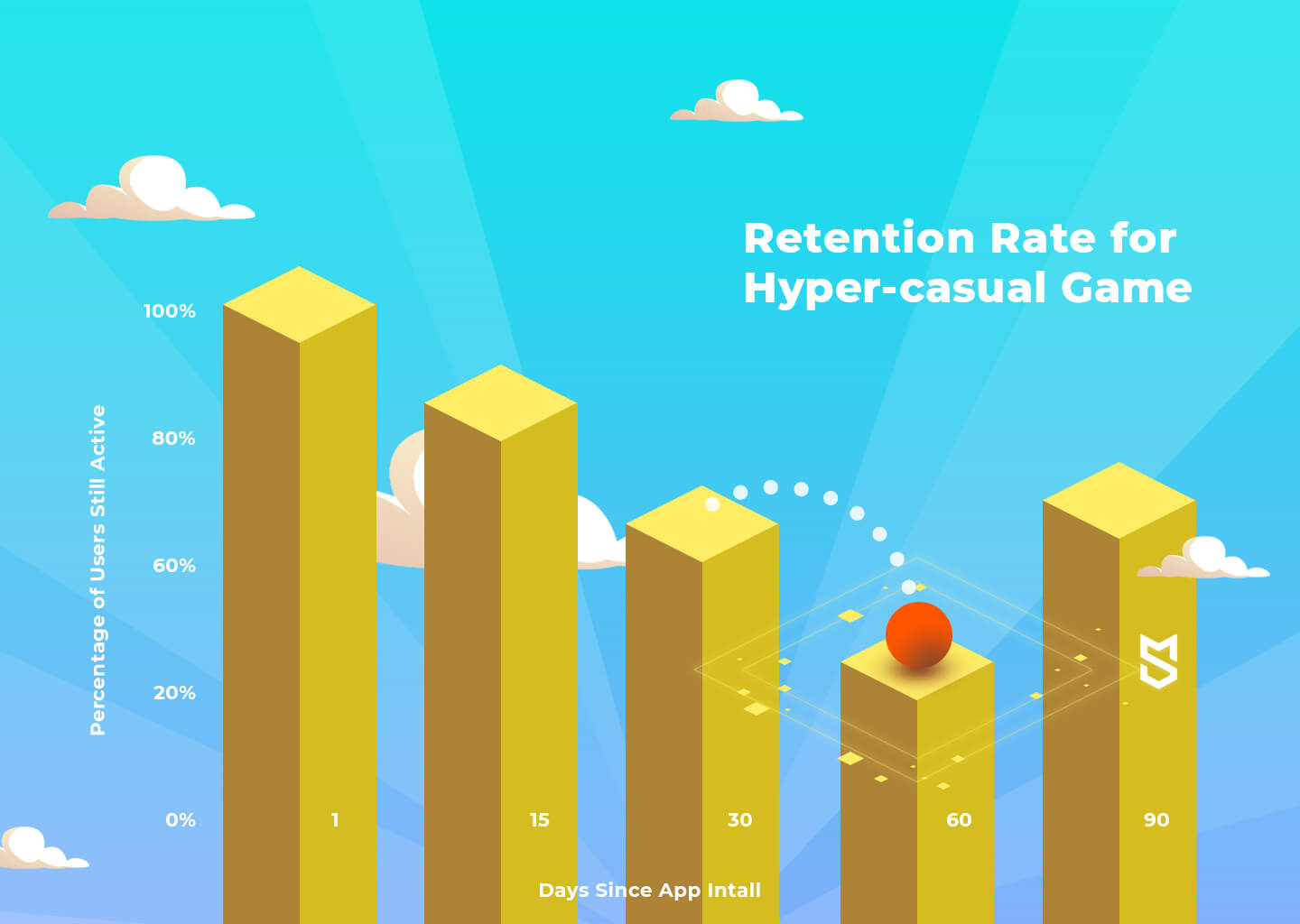 Marketing is a huge part of creating hyper casual games successfully. It’s important to hit the masses: if you don’t, the revenue might not cover the investment in development.

Voodoo owes a major part of their success to strong marketing. (Another part is that they have not one and not two but many hyper-casual games and can cross-advertise them. But that’s more of a long-shot goal if you’re making your first game.)

In the case of hyper-casual games, the most important markers to monitor are day 1 through day 7 retention. If it shows less than 35% retention over this time, something might be wrong.

One of the pros of working with a game development company instead of independent developers is that a full-sized company can help you analyze market trends, decide on a monetization strategy, and come up with a marketing plan.

How much does it cost to develop a hyper casual game?

It’s tricky to estimate the cost of hyper casual game development — it depends on too many factors, from the number of features to the complexity of the graphics. However, the cost to make a hyper casual game is within the lower range for games.

With simplicity at the core, both in terms of visuals and mechanics, you won’t need too many people working on your game:

The time needed to make a hyper casual game in Unity is also not too long — about 1-2 months. Keeping these two factors in mind, we’d say it’s possible to fit your game development costs within $10,000. If you decide to add some extras, it will increase both the time and cost.

Competing with mobile game industry leaders like Voodoo is tough. However, the good thing about the hyper-casual genre is that with lightweight and simple games, the competition between developers is way less scary than among hardcore game creators. The latter sometimes have to fight for every user.

Hyper-casual games happily coexist: a gamer can play a variety of hyper-casuals, each for different moods and different amounts of free time. And no one will suffer much loss in revenue as long as users come back. Casually.