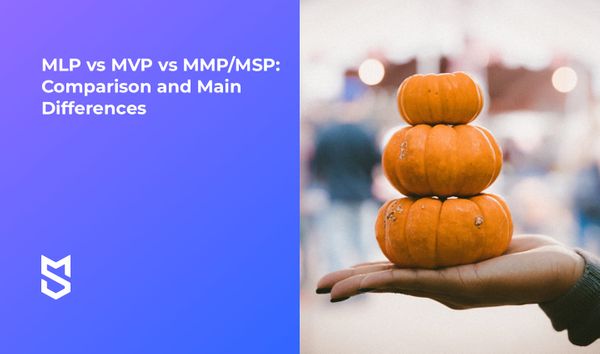 What are the differences between an MLP and MVP? What about an MMP? Which do you need?

When the theoretical part of app development, idea validation, is all but completed, it's time to think about building the first, heavily abridged version of your product to test the waters. And suddenly, you're faced with the need to choose what kind of "minimum product" you need. There are several options, and the lines between them can seem a bit blurry. 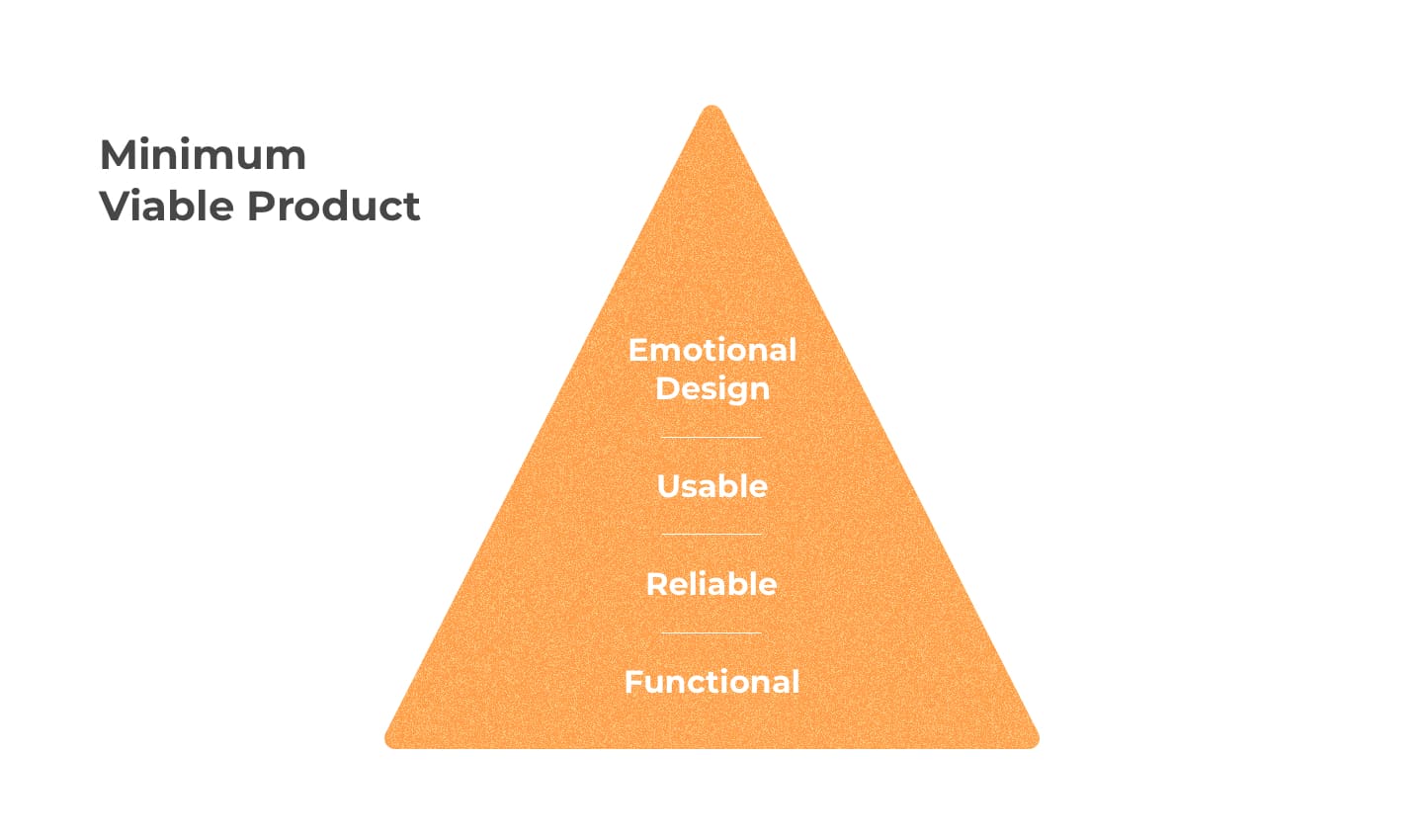 Speaking of "minimum products", the first type that comes to mind is the MVP, or Minimum Viable Product. Usually, it's the go-to solution, the standard of "minimum" products. This is also the term you'll encounter in many, if not most, articles about the app development process. According to Eric Ries, an entrepreneur and the author of The Lean Startup, an MVP is:

[...] that version of a new product which allows a team to collect the maximum amount of validated learning about customers with the least effort.

An MVP is a tool to collect data and learn the market needs and wants. It's the barest of the barest minimum of what you can launch and expect some kind of reaction; it offers the most basic functionality for the purpose of validating your idea and getting a grasp on where to move with the project to make it profitable and popular.

Read also: How to Prioritize MVP Features & What Comes After MVP 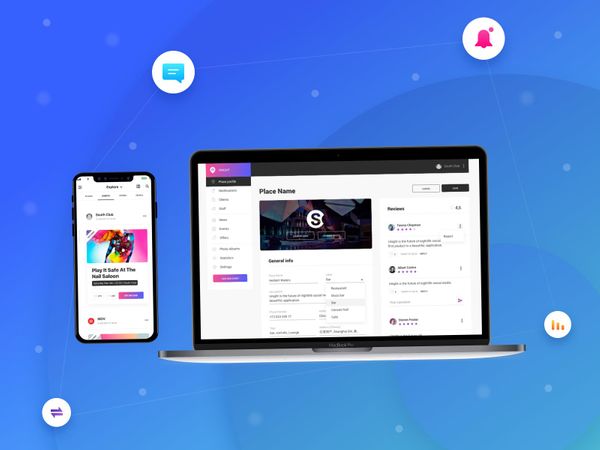 The advantages of an MVP are its cost and the speed of development. However, in the good-cheap-fast triumvirate, the MVP is the cheap and fast one. Meaning it's not something you can call good enough for an actual full launch. It's the idea of the app, not the app itself. It does, however, allow you to check if your idea can actually survive on the market and if anyone needs an app like this.

As you move along with the project, you can (and will, most probably) have several MVPs, each corrected according to the feedback you receive from your test group/early adopters regarding the previous iteration. At the end of that process, when you've accumulated enough MVPs and managed to find the basic set of features your users are ready to pay for, you will have your Minimal Marketable Product, or MMP (also called a Minimum Sellable Product, or MSP). 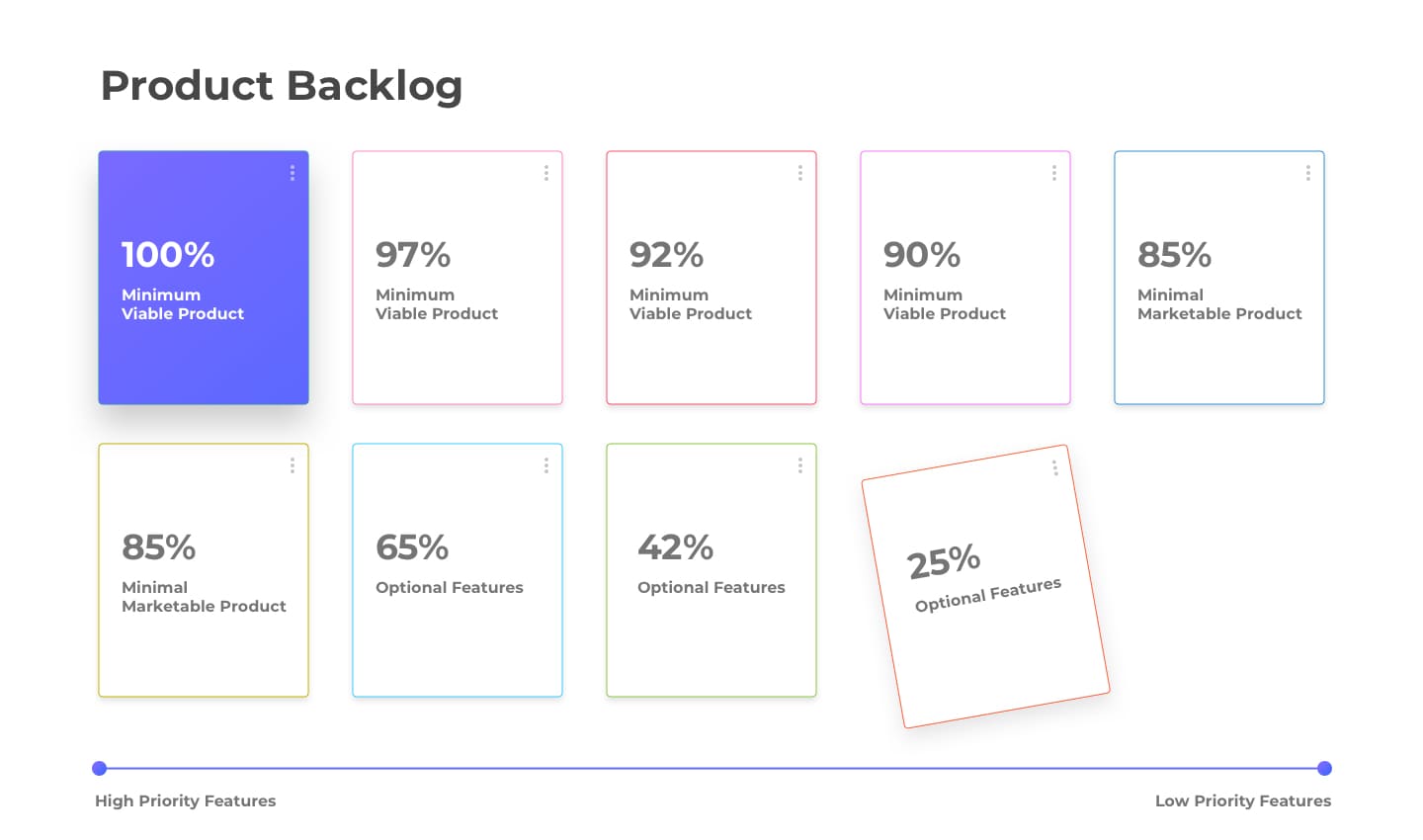 A minimal marketable product is the best version of the MVP that you get after a number of trials and errors. It has a basic set of features, but those features are what have come out of the mill that is the early adopters — a set of features that addresses users' needs and pains. Hence, you can be pretty sure that users will be willing to pay for these features at some point. This is what makes the product marketable.

An MMP allows you to launch your app early and at a lower cost than a full version and maybe even start getting some return on investment while further app development and upgrades are underway. An MMP is convenient in that you don't need to constantly worry about how users will react to your full product when it's launched eventually. The scalability of the MMP enables you to adjust to changes on-the-go.

So what's the catch?

According to Statista, by the third quarter of 2018, the Google Play Store had 2,100,000 apps and the Apple App Store had 2,000,000. Two. Million. Per store. And growing. Consider it. Even if you take a single category, it will still have dozens if not hundreds of options. And unless your idea is some kind of a total breakthrough, with little to no competition or with ways to gain users through advertising by influencers and popular brands, you'll find yourself in a pinch if you only offer some basic features. Because chances are, all these features are already available in other, full-fledged apps.

If you have a mobile app idea for an already established market, what you need to create isn't an MVP but an MLP software: a Minimum Lovable Product. 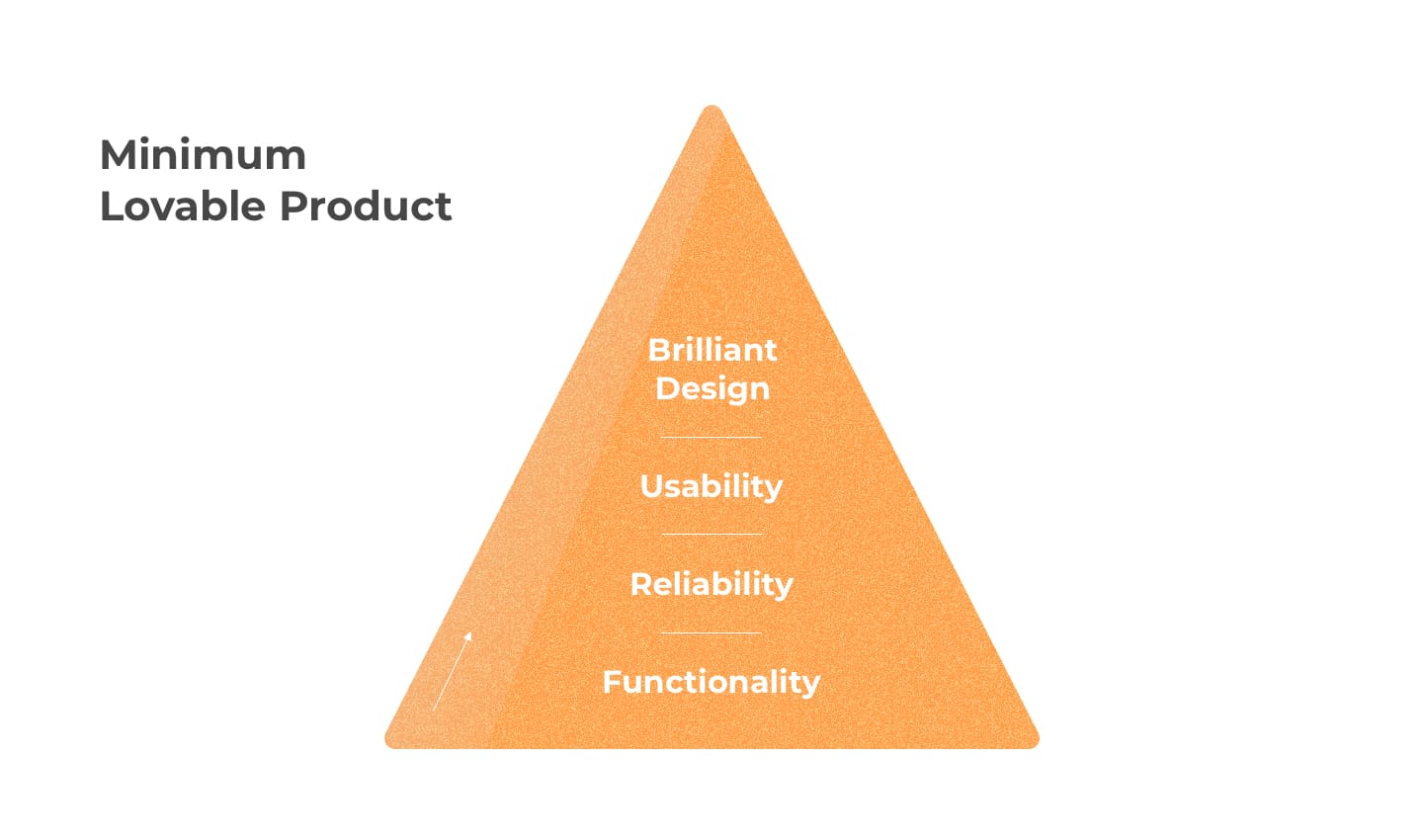 The thing that an MVP and MLP (and an MMP) have in common is that they offer only a fraction of what's to come. However, whereas an MVP is stripped of anything that isn't a functional element, an MLP is designed to be loved right away. It's all in the name, really.

Every Disney movie shows us, early on, how powerful love is — it can turn a frog into a prince, after all. The message is enforced by the culture as we grow up. So you shouldn't be all that surprised that it's relevant for business as well.

A minimum lovable product is also an abridged version of what you're planning. But it offers a bit more than bare functionality. Maybe not in numbers but certainly more in quality. It's your frog with a tiny crown, in a way — a promise not yet fulfilled.

The trick with the MLP is that you focus on the most important features instead of the bare minimum expected from an app in the class, but you do those important features justice. That means making them not just operational and functional but also enjoyable and, therefore, decently designed. You need your early adopters to have an emotional reaction. It can be good or bad, but emotion spurs engagement.

Engaged users are happy to interact with the brand, they're interested in what you're trying to do, and they want to be a part of it. Just like that, your frogspawn is turned into a handsome prince in the eyes of the astonished audience — your competitors.

An MLP offers features that users will want to share. It relies heavily on customers' emotions, for emotion is hugely influential. And on the overcrowded markets, it can be a deciding factor.

What are the differences between an MVP and MLP? 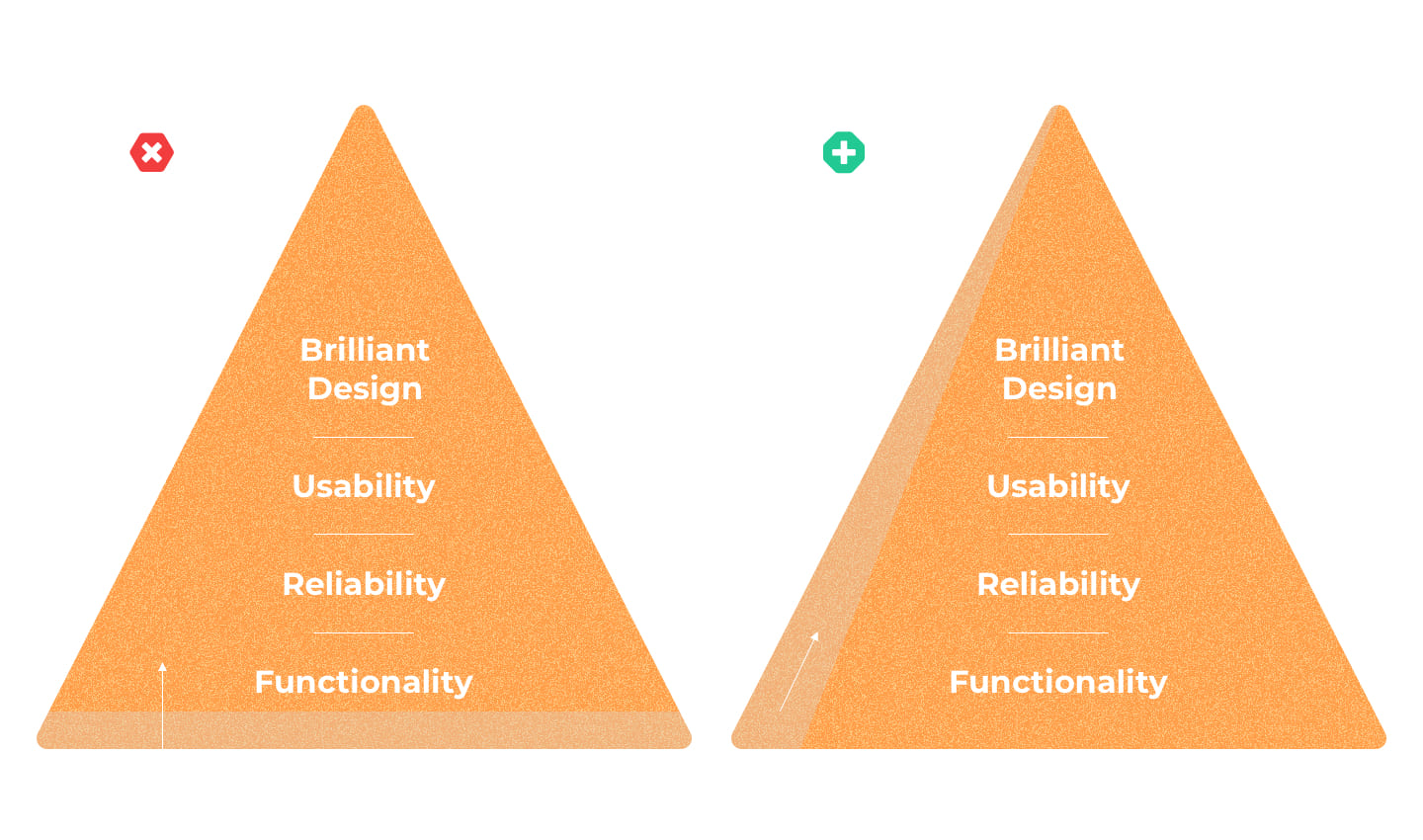 Well, let's compare MVP vs MLP. First and foremost, an MVP is a tool for evaluating ideas. It's mostly necessary at the earlier stages, and you can forego it if your idea isn't completely innovative and has analogs on the market. If there are already similar apps, you don't need to validate the idea by building a minimum product. Some research and surveys can do the job of evaluating the innovative part just fine.

Creating an MLP will take more time than you'd spend on an MVP, and the cost will also be higher. But if you manage to emotionally attach your early adopters to your product, you'll have a better chance of achieving your goals in the long term.

An MVP is about evolution — walking to the better future, one step at a time.

An MLP is more like a revolution — you take your early adopters, you give them minimum features (but the most relevant), you make them see your end goal and love it, and you make them rally behind you, spreading the word while also providing feedback on how to reach that end goal.

On the technical side, the difference lies most often in making an investment in design. When launching an MVP, many companies skip on usability and emotionally engaging design. While this helps to launch the product faster and at lower cost, it might as well result in your MVP getting lost in the sea of similar but already fully developed apps.

An MVP is great when you're bringing a new concept to the public. In most other cases, it's an MLP you need.

The difference between an MMP and MLP is more subtle than that between an MVP and MLP since an MMP is an MVP that has been updated several times over and, hence, is of better quality. The core distinction is the same, though.

An MMP is the minimum that the market is ready to pay for, while an MLP is something users will fall for and will be anticipating a full release of.

An MMP is a sellable product the way it is, to a degree. That's the point of releasing it, after all. With an MMP, you'll have a chance of getting some ROI earlier, if you're lucky.

You can't sell an MLP right away. Or rather, you shouldn't try to. The advantages of an MLP include heavy engagement from users as you build up the "lovability". This engagement will create attachment and an emotional link which, in turn, will have every chance to turn your early adopters into loyal customers.

And the value of loyal customers can never be overestimated. 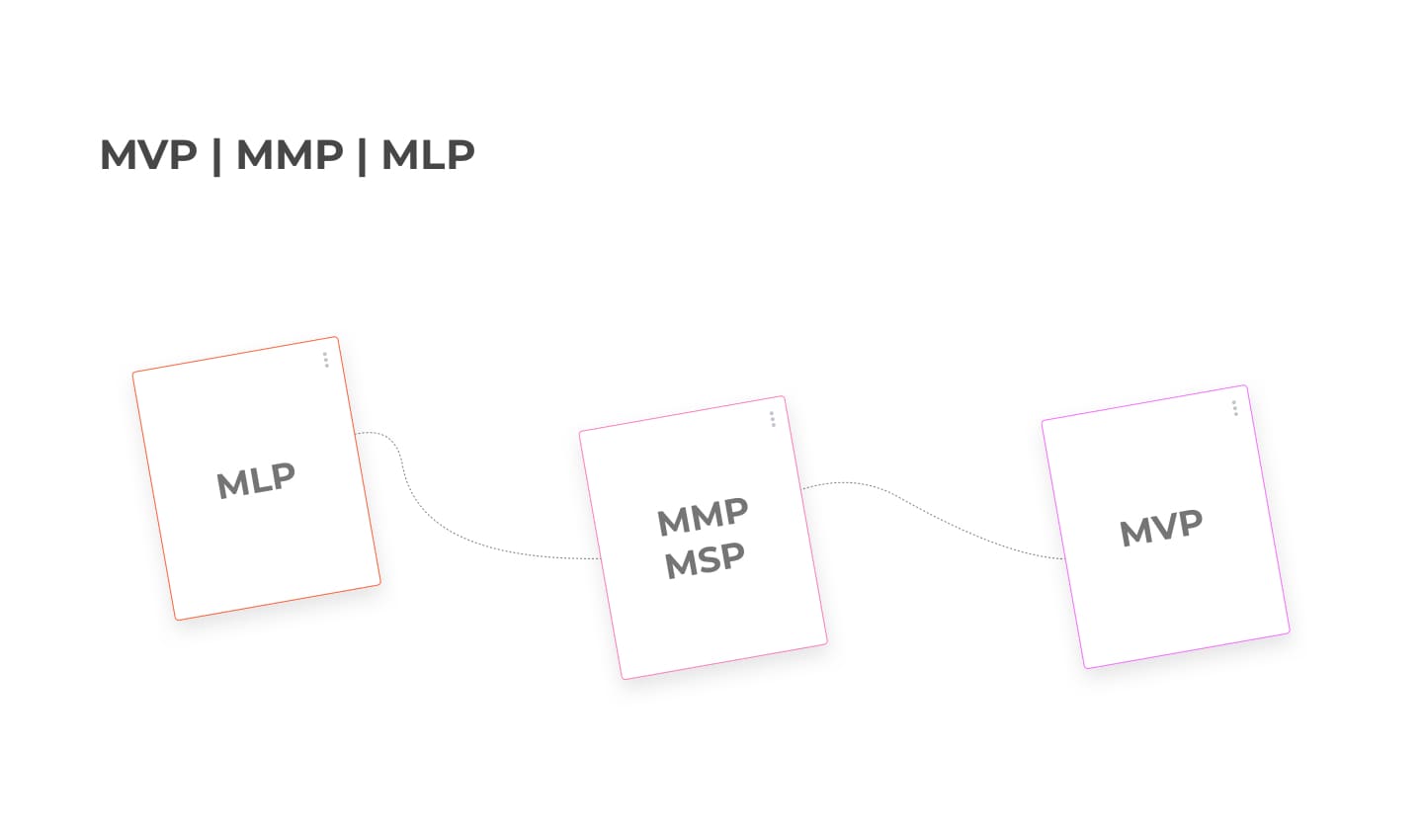 MVP VS MMP VS MLP: Conclusion

At Mind Studios, we prefer working with MLPs because of the benefits they offer. We find this is the most successful method of development. After all, if you think about it, a lovable product is both viable and marketable.

Users will rarely crave a product unless they feel like they really need it and it sates some acute need. Therefore, there's no such thing as the "MLP vs MVP" war. These concepts don't clash, as the minimum lovable product is viable by default.

And since customers love it, they'll be more than happy to pay for it, which makes the minimum lovable product marketable.

So, we looked at the difference between an MVP and MLP and other versions of the product. If you have an app idea you believe can make a difference and you're looking for an outsourcing app development company to make it happen, our seasoned technical specialists, designers, and project managers will be happy to be your guides and assistants to market success. Contact us if you have any questions. We will gladly answer them.