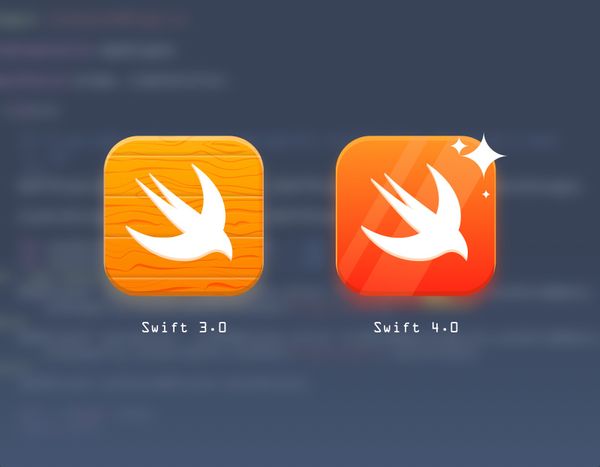 The day Apple releases a new version of the well-known Swift language has finally hit us. What should we expect from it? While trembling of anticipation, we have decided to present swift 3 vs swift 4 comparison and a tiny overview of the fresh updates that will be present in Swift 4 version.

As a fantastic language to write code on, Swift has its own benefits, and is claimed to “outlive” the Objective-C language.

Swift is fast, type-safe and very expressive. It could be used to write software on phones and tablets, desktops and servers - apparently, on everything that runs code. It welcomes you to play with it - with Apple’s learn-how-to-code Swift Playgrounds app or using Playgrounds in Xcode you get to see the results of your work immediately, no need to put your nose down into developing and running an app at first place. With every new additive version it becomes better and faster, and that’s the case with Swift 4 version.
Ready-steady?

Another great feature that Xcode 9 possesses for Swift 4 - you don’t need to worry much about the upcoming migration and you will figure out why while reading this article.

Speaking of which, let’s explore briefly what bonbons and Swift 4 new features this fall brings us.

Language itself is not very useful without a handy IDE, which is Xcode in  developers world. You can download latest version of Xcode 9 from Mac App Store or at Downloads page at Apple Developer site, but make sure that you have an active developer account firstly. It's pretty stable so you can replace Xcode 8 with it for your daily coding routines.

You can also install multiple versions of Xcode using xcversion

If you are starting a new project - you are good to go. But if you already have a project written in Swift 3.x - you have to go through a migration process.

We recommend to firstly try on the Playground - to get accustomed using new features.

You’ll notice links to Swift Evolution proposals in the 'SE-____' format as you’re reading this article.

Migrating to Swift 4 from Swift 3

Migration from one major version of Swift to the next one has always been pretty intense, especially from Swift 2.x to 3.0. Usually it takes about 1-2 days per project, but migration to Swift 4 from swift 3 is a bit easier and can be passed much faster.

Xcode 9 supports not only Swift 4, but a transitional version 3.2 as well, so your project should compile without any harsh difficulties. This is possible because Swift 4 compiler and migration tool support both versions of language. You can specify different Swift versions per target, this is very helpful if some third-party libraries didn't update yet or if you have multiple targets in your project. However, not just language, but the SDK has got some changes too, so it's very likely that some updates will have to be applied to your code as Apple continues to tide up SDK APIs...

Tool to migrate from swift 3 to swift 4

As always, Apple provides Swift migration tool bundled within Xcode which can help migrating from previous Swift version. You can launch it in Xcode by going to Edit -> Convert -> To Current Swift Syntax… and selecting which targets you want to convert.

You will than be asked which Objective-C inference preference you want to apply:

As the additive changes dominate in Swift 4, the Swift migration tool will manage most of the changes for you.

Most  developers use CocoaPods dependency manager for their projects as Swift Package Manager is not as mature as it could be, although it's improving very fast. As mentioned above, not all third-party libraries were updated to Swift 4 yet, so you could see errors while compiling some of them. One possible solution to fix this problem is specifying Swift version 3.2 for those pods which weren't updated yet by adding a post_install script to you Podfile:

Now you can compile pods without errors.

There is no need in characters array property now as you can iterate over String directly:

This also means that you can use any Collection methods and properties on String, like count, isEmpty, map(), filter(), index(of:) and many more:

Swift 4 brings new Substring type which represents a subsequence of String (as described in SE-0163 mentioned above).

Both String and Substring now support new StringProtocol which makes them almost identical and interoperable:

Which means that Substring is intended to be used as a temp storage for String subsequence. If you want to pass it to some methods or other classes - convert it to String firstly:

Anyway, Swift's type system will help you not to pass Substring somewhere where String is expected (assuming that you are not using new StringProtocol as parameter type).

SE-0168 introduces a simple syntax for multi-line string literals using three double-quotes """ which means that most text formats (such as JSON or HTML) or some long text can be pasted in without any escaping:

SE-0182 adds the ability to escape newlines in multi-line string literals with a backslash in the end of the line.

Swift 4 brings support for Unicode 9 which means that problems with unicode characters counting are now gone:

All of the changes and implemented proposals highlighted above (as many more others) are taking their roots from a broadly described set of features called the String Manifesto.

Swift 3 brought a very contradictory element to Access control - fileprivate access modifier which can be really confusing.
Previously, private access level modifier was used to hide type members from other types and private members could only be accessed by methods and properties defined at type definition, leaving the same type extensions aside as they couldn't access those members.
fileprivate could be used to share access for type members, such as properties and methods, within the same file.
In fact usage of private led to a problem when extensions on some type didn't have access to members of that type, so using fileprivate in under such circumstances was a very common solution, which has led to another the problem: other types in the same file could access those members too.

Swift 4 puts things in order by allowing extensions on the type to access private members of that type in the same file as described in SE-0169:

Dictionary can be initialized with Sequence now, but not all sequences could be passed in this initializer, only those containing tuples (Key, Value), where Key is the key type of the Dictionary and Value represents Dictionary value type:

Here zip function creates a pair (Tuples) from 2 sequences, you can read more about this function in Swift Standard Library documentation.

You can specify how duplicate keys should be handled when creating a dictionary from a sequence of Tuples by passing a closure to uniquingKeysWith parameter, which is used to combine values from 2 identical keys.

Here we leave the first value ignoring all next values with the same key.

Counting how many times each character appears in string.

Previously, a common practice was to use the nil coalescing operator to give a default value in case the value is nil.

You can also mutate a dictionary while subscripting it with default value:

Previously, in order to serialize some custom type you'd have to use old and well known NSCoding protocol. The problem is that non-class types such as struct and enum can't conform this protocol, so developers had nothing to do than use hacks like providing additional layer of compatibility by creating a nested class that could conform to NSCoding.

Swift 4 has a very convenient solution to this problem thanks to SE-0166 - an introduction of Codable protocol:

In simple case like this one all you need is to add Codable protocol conformance to all your custom types, the compiler will do all the magic for you. That's it! 🚀

Codable is a typealias for a composition of Decodable & Encodable protocols, so you can declare, for example, only Decodable protocol conformance if you want to decode your type instance from JSON data.

If you want to serialize or deserialize a Codable value - you have to use and encoder or decoder object. Swift 4 already comes with a set of encoders/decoders for JSON and property lists as well as new CocoaErrors for different types of errors that could be thrown during encoding/decoding. NSKeyedArchiver & NSKeyedUnarchiver also support Codable types.

In most cases names that we use in custom Swift types don't match the keys in JSON data that represents this type. To create a mapping between custom type properties names and JSON keys you can create a nested enum named CodingKeys which should conform to CodingKey protocol:

If you have a complex case you can implement your custom initializer from a Decodable protocol:

One of the handy Swift 4 features is Smart KeyPaths described in SE-0161. Unlike Swift 3 #keyPath(), which is not strongly typed and works only for Objective-C members, Swift 4 KeyPath is a generic class, which means key paths are now strongly typed. Let's dive into some examples:

The general form of key path \<Type>.<path>, where <Type> is a type name, and <path> is a chain of one or more property, for example, \User.username:

You can also write a new value by this key path if it's mutable:

Key paths are not limited to one level of hierarchy:

Key paths can be stored in a variable:

You can also use key paths for optional and computed properties:

Despite that SE-0161 highlights support subscripts in key paths, they have not been implemented yet:

In addition to new key paths, key-value observing API has been updated in Swift 4 too.

Call invalidate() method if you want to stop observation

It's also stopped when deinited, so make sure to store it in property or somewhere else if you want to preserve it.

SE-0172 introduces "one-sided" ranges, created via prefix/postfix versions of the existing range operators, and a new RangeExpression protocol to simplify the creation of methods that take different kinds of ranges.

You can use a one-sided range to construct an infinite sequence:

SE-0148 Subscripts can now have generic arguments and return types 🚀

Swift 4 minimizes @objc inference by limiting it to only those cases when the declaration has to be available for Objective-C (SE-0160).
This decreases your app's binary size by not compiling redundant Objective-C code if you don't use it, and gives more control to when @objc will be inferred. NSObject derived classes no longer infer @objc.

But there are some situations in which Swift code will continue to have an implicit inference:

In Swift 4 we can now compose protocols together with other Swift types:

The advantages of Swift 4 are really huge, as it often happens when Apple releases a new language version. Apart from the improved language performance, it has also stabilized the migration process greatly. Casting our minds back to the process of migrating Swift 2.2 to 3.0, we recall the perplex process of transferring all the dependencies. Swift 4.0 changes lets us leave the third-party libraries without actually “relocating” them - you just need to update Swift itself.

Also regarding the Swift 4.0 vs 3.0 improvements, the compiled binary files size has been changed, which has resulted in the decrease of app’s size; e. g. mobile application used to weigh 20 MB, and in the newest Swift-version it will take around 17 MB. And there is a basic difference between Swift 4 and Swift 3 - the bug fixing has happened, and language has become a bit more rapid.

It’s been years since Swift has been in use, and it continues to evolve with every coming update. With each new language renew new development perspectives, unknown before, arise and we look forward to exploring new iOS horizons.

Don't miss out on our article about MVP vs MVC vs MVVM vs VIPER for iOS development.