The case study aimed to describe one of the startups the technical part of which we recently helped to realize.

Fit is a new black.

As the healthy lifestyle is popular with crowds these days, the variety of fitness applications the shelves of Apple Store are stacked with today is countless and limitless, covering almost every sportsman's needs, even the needs of the most picky ones. Taking the most popular we can easily see how broad is the spectre they cover:
For instance, Pacer helps you track the distance you go through on a daily basis, and Daily Fit offers a legion of ready-made workouts for those who find going to the gym rather inconvenient. For those who are on the opposite side of the bridge - there is SternFit now.

...As our client Roy originally approached us with an idea of an application that will make sportsmen with some extraordinary sport accomplishments famous. An athlete himself, Roy knew from experience how it feels to lack the recognition from the audience side - as it prevents so many talented individuals from achieving something worthy. The whole concept was to create an app, mainly serving the purpose of the “social network for sport people” with the main focus on photo and video shown in the feed, which is why we decided it should bear a bit of resemblance to Instagram. Working this way gifted - and yet unknown- athletes can get recognition - while showing their gym-sessions and dietary cooks online in their feed, and the followers would get motivated to stay fit, so it would be a win-win situation for both parties.

As Roy’s request found us, the first thing we did was a broad market analysis - to see where SternFit could outrace the possible competitors. The exploration proved the idea to be unique and the target audience to be looking forward to it.

Right after the market research was documented, that was the right time to embed Roy’s vision into a pure UX, starting from the basic prototypes. The challenge our designer faced was to create something a user could percept as the upper-class gym feed. Moreover, as the average user is going to be a sportsman - the UX we had to create also had a test of being responsive enough to appeal to all the requests of a professional sportsman. On top of that, the uniqueness and exclusiveness especially important for Roy were found while doing numerous sessions of surveys, researches and brainstorms.

As the result we presented - after the prototypes were approved - 4 differently colored schemes, leaving the final decisions for our customer - as who understands the athletes better than an athlete does? The solution Roy picked was the cleanest and the simplest at the same time, bletchingly white, leaving a comfy feeling of space as the user’s impression. 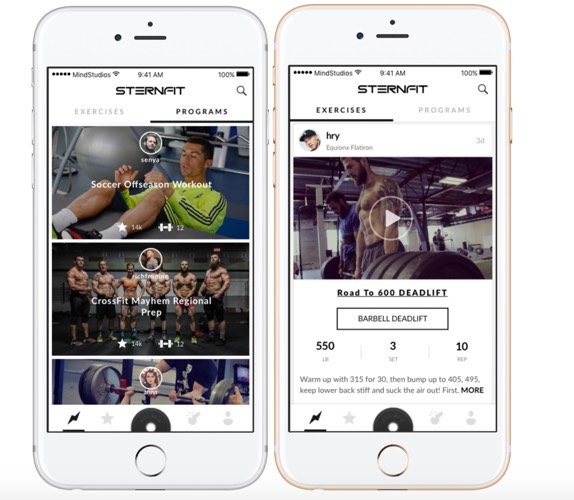 The accent of SternFit was also in it’s tab bar - as in our eagerness to make it even more authentic we created a whistle for notifications and a slapjack for the main fintess-looking tab bar button, in hopes that will motivate gym people to add extra 25 kilos on their barbell. 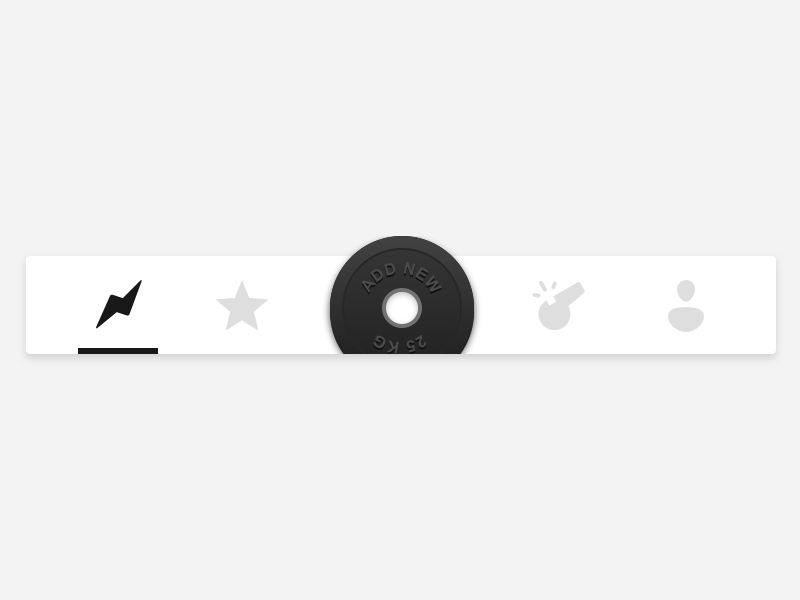 As SternFit doesn’t just offer exercise regimes while offering a more holistic approach, letting you combine different powerlifter’s styles, the approach our iOS team was holistic as well. Written on Swift 2.0, this application had it’s daunting beauty in video feed - as Roy wanted them to be scrolled down implying Insta-feed analogy. The trick here was that no native iOS player could show video in a feed section, leaving full-screen option only. This option wasn’t satisfying for our client, which is why we implemented the custom player - Mind Studios’ creation, Swifty player. As the result all the positions were saved, and the video starts playing meanwhile you scroll the news feed.

Also after long-ride trying we made it possible for the scrolled content to stay on the same place when the user switches between the tabs - Twitter has this favorable option and we saw it as a user-friendly move. Roy also wanted to give SternFit’s users an opportunity of advanced filter system everywhere - starting from the geo-location and further on, including the top user, weight user, program and exercise type search options.

SternFit 1.0 version was released as a beta-version, for us and client mostly to analyse feedback and evaluation. The results didn’t take long to come, so in the 1.1 SternFit version we added the social accounts integration, including the phone & mail list contacts.

Read also: cost to build a fitness app like FitBit

Be Stern, Be Fit.

Nothing could prevent SternFit’s grand release right to the App Store, for the sake of athletes worldwide competing for the best they can in their gym, country, world. Eventually satisfied with the Mind Studios work Roy is optimistically looking for the future branding of his product - via using the extensive social media campaign + gym-to-gym marketing.

SternFit is already an investment into a better making world where people keep shape no matter what, and this platform is the source of inspiration once you have your dark times ;)

To get a better feeling of how a SternFit's design looks like you are invited to look at our SternFit on Behance.

Working with people like Roy is the ultimate thing we love about the job we do. The fire we see in their eyes, the eagerness and aspiration they irradiate with is contagious as we help these startups take the place under the sun.

Got an idea but lacking tech realization? We can help bringing your idea to reality :)