Before the much anticipated release of the freshly-made Gadh iOS application for the American market, there is a bit of introduction from the Mind Studios side — to get to know the inner processes of software creation.

No matter how hard we try to follow the path of righteousness, people are taken advantage because they don’t have access to legal advice. Life in the concrete jungles such as New York City is filled with pitfalls. Quick and affordable access to legal help can be hard to find and the consequences can be dire. We live in a world where people try to take advantage of others and the lawyer in your pocket is hoping to change that for the users of the app.

Human lawyer 24/7 in your cell-phone.

As this was the idea Gadh has originally approached us with. In the beginning when the stage of prototyping and specification was about to start, our client — a good-natured and witty lawyer Sachin Gadh from the city of New York — introduced the application’s concept. “I see a need and market for quick access to legal help without paying hundreds of dollars in retainer fees. This app will allow people to ask questions, upload evidence and schedule a video call every month for $19.99. By helping people, we can create a digital lawyer-client relationship.”

Gadh was destined to be a legal app — a communication tool for a law firm and client with must-have features including chat, book appointment, evidence upload GPS and facetime.

The market and user researches both have shown that this is an untapped in the field of attorney’s apps. Most apps are referral sources which direct you to a specialized attorney but the Gadh app actually retains the client and offers a real lawyer answering questions.

You can read more about the importance of market research and business model here.

Michael Jordan among the lawyers.

The design part is the one you take things visually, building a complex construction with the associations appearing in the user’s mind. In case with Gadh, the same scheme had to be applied - as the purchaser had to experience the true courthouse atmosphere while logging into the application.

The first color disposition team decided to explore was dark blue - the symbol of calmness and stability as so widely used in various banks and government organizations. But as changes are an inevitable part of the development process, Gadh was eager to experiment with the color schemes - which is why 4 differently hued interfaces were presented to him (see the photo below). Finally the Gadh has chosen the golden brown version - meaning to symbolize the wooden hummer - an essential tool for every judge and every courthouse.

The big deal also was lawyer’s branding and logo’s identity - as it had to represent the app’s main function in a tiny picture.

Fortunately, Sachin was a huge fan of Michael Jordan - so he saw the Gadh’s logo as a mixture of Michael Jordan’s silhouette with a lawyer’s outlook, carrying a pen instead of the ball in hand, hurrying to protect you. Eventually the outcome product came as a satisfying solution for both sides.

The whole engineering process was split into 4 sprints 2 weeks each with the achievements marked and updates received in the end of every of them. Gadh was supposed to and written on Swift 2.2, with later being transferred to the latest 3.0 version. The customly written by Mind Studios iOS team features included:

Per contra, as the Sachin’s top favorable function of video chats between him and client would require a particular framework, where we picked OpenTok, a tool allowing coders to build live and interactive videos into their applications.

Also challenging for the Gadh project was the subscription selection - during the brainstorm we decided to pick the renewable subscription as the most favorable in-app purchase available in the Apple Store. Enabling it to be validated via backend allowed us to exclude all the potential machinations from user’s side.

Hence, the GEO location manager helped with imaging user’s coordinates in the admin’s profile map - so that Gagh could see where exactly his client is, and whether he could be reached or not.

The backend points for optimization were appointments scheduled in calendar, and web-browsed push-notifications - not the typical in-device ones, as it would be more convenient for application owner to receive them on web.

Gadh - tested for the sake of better performance.

The sprints brought an MVP so there was a right time and place for the 5th iteration to appear as a beta-testing cycle. 50 active users were dragged into the app. During the beta testing we have uncovered a number of issues that needed the asap resolution, such as:

The series of the previously mentioned improvements resulted in the 2nd wave of the system examination - where the better Gadh’s performance finally made it to the release point.

Users were kind enough to leave some feedback for us: 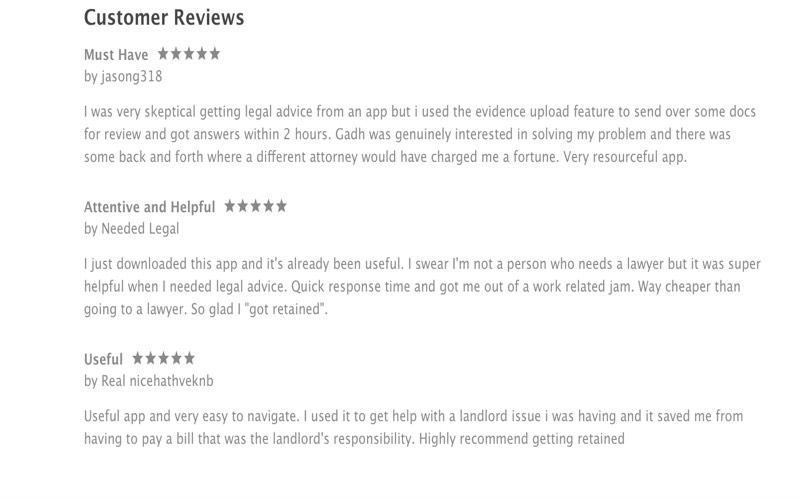 Fully-functional and available on the Apple Store now, Gadh application has begun offering representation to users with an ambitious marketing plan, and the enthusiastic Android application coming soon, Gadh’s project should a booming success in the world of digital consulting apps.

The advise-on-the-go applications are the promising future for people working in the same field our client does. It goes without sugarcoating that the era of face-to-face consulting is slowly giving in to the future of video chats and hologrammed meetings, so following in the footsteps of Gadh and his mobile application is a way to a future material safety.

Read reviews, compare customer ratings, see screenshots, and learn more about Gadh - Lawyer in your pocket. Download by clicking the button below:

You are most welcome to read about our experience with routing applications and fitness app as well.

Got an idea for a online consulting app? Share it with us :)